German energy is dirty, and Ireland has a fluctuating carbon intensity

A report analyzing the carbon intensity of electricity across a set of EU countries has found wide variation, with Sweden and France having the cleanest power.

During June 2022, France and Sweden had low-carbon "clean" energy, thanks to Sweden's use of hydroelectric power, and France's strong nuclear power provision, according to a report from Cirrus Nexus. During the same period, Germany had much "dirtier" energy, using a lot of coal to make good a shortfall from previously canceling its nuclear program. Meanwhile, Ireland's carbon intensity fluctuated wildly as variations in wind power meant it frequently had to switch on natural gas plants. 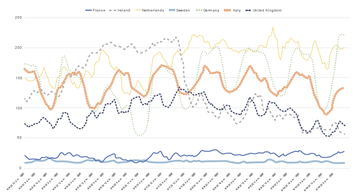 The study used Cirrus Nexus' TrueCarbon tool, which uses public data to track the carbon intensity of electricity, and can be used by data centers to monitor their environmental footprint, and potentially reduce their impact by shifting loads to different locations. As well as Europe, it also addressed US data center markets, finding that California and the Northwest had the cleanest energy, while the Midwest was dirtiest.

The report warned that if carbon emissions are taken into account, the true cost of running cloud workloads may be more than the service provider promises, by a factor of two to seven percent in Europe, and up to nine percent in the US.

Because emissions vary, Cirrus Nexus recommends that cloud customers move workloads to geographies which are greener at a given time.

"The actual cloud costs of running workloads is relatively stable on a daily basis, but carbon intensities can fluctuate greatly. Therefore, companies have opportunities to reduce their cloud carbon emissions by tracking their workloads to these daily patterns, without materially affecting their total cloud spend," the report says.

However, Cirrus Nexus CEO admitted to DCD that few companies seem to be going for the benefits of carbon arbitration and moving workloads around at present, Noble told DCD. "There's a lot of reasons. One is the what I call the reverse Nimby effect. They want the data center in their back yard, even if it's in the cloud. But if the service goes down, and you head to the data center, will the cloud service provider let you in to work on the servers? Of course not."

Customers will also be concerned about cost - for instance, cloud providers in France may have greener power, but are more costly.

They also may need to keep data within their own country because of "data sovereignty" where local privacy legislation may require it.

They also may hesitate to move loads to Sweden, fearing that latency will be higher because of the distance from customers. This may be illusory, Noble pointed out, as often cloud performance is more about how heavily loaded a given system is. It's true that Facebook successfully serves customers across Europe from a large facility in Sweden.

Finally, the power prices fluctuate, and the study found a variation in carbon intensity over time: "'Green; data center regions don’t always stay that way and can experience significant fluctuations in carbon intensities due to frequently changing energy demands and sources," the report says. "Ireland went from middle of the road, then to the dirtiest, and finally to the third cleanest data center region, all within the same week."

Update: An earlier draft of this story was entitled "France and Sweden have cleanest European power, says report". It has been pointed out to us that Iceland and Norway have energy just as clean as Sweden and France, and they are in the geographical area of Europe - though not in the EU. We have updated the story to reflect the limited range of the report, and look forward to hearing more on the energy mix in all countries.