The executive director of the Defense Innovation Board, Joshua Marcuse, will join Google.

The DIB advises senior Department of Defense officials about technological advances, including Big Data and cloud computing, and serves as a conduit between the military and Silicon Valley.

Eric Schmidt, former CEO of Google, serves as chairman of the Defense Innovation Board.

Marcuse will join Google as head of strategy and innovation for global public sector, Defense One reports.

In that role, Marcuse will be instrumental in selling Google services, including Google Cloud, to the Defense Department and other national security agencies, state and local governments, and other countries.

But what exactly Marcuse will be able to sell is unclear, after Google employees protested the company's military contracts.

In March 2018, Gizmodo revealed that the company was working with the Department of Defense on Project Maven, with the cloud contract focusing on image recognition for military drones.

A small deal worth around $9m, Google's Maven work was viewed by the Cloud division's then-CEO Diane Greene as a way to open the door to larger contracts with the DoD. But some at Google expressed concern about whether the company, famous for its ‘Don’t Be Evil’ slogan, should be getting into the business of war.

"Amid growing fears of biased and weaponized AI, Google is already struggling to keep the public’s trust," a petition, signed by some 4,000 Google employees, said. "By entering into this contract, Google will join the ranks of companies like Palantir, Raytheon, and General Dynamics."

Around a dozen Google employees are believed to have resigned over the Maven contract, with one departing engineer petitioning to rename a conference room after Clara Immerwahr, a German chemist who killed herself in 1915 over the use of science in warfare. “Do the Right Thing” stickers appeared in Google’s New York City offices, it was reported. 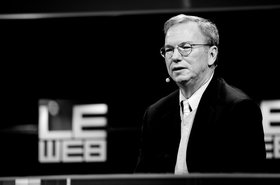 Eric Schmidt steps down as chairman of Google parent Alphabet

Google’s Secretary of State heads into the sunset

Google tried to contain the crisis by entering talks with staff including Greene and Meredith Whittaker, at the time a Google AI researcher who was among the most vocal against the Maven deal, as well as Vint Cerf, its VP and Chief Internet Evangelist.

The company then released its "AI Principles," that clarified the company's views on working with the military, and in June 2018 said that it would not renew its Maven contract.

Four months later, Google said that it would no longer compete for the Joint Enterprise Defense Infrastructure (JEDI) cloud contract, a single-award deal for the majority of the DoD's cloud computing needs, worth up to $10bn over 10 years.

“We are not bidding on the JEDI contract because first, we couldn’t be assured that it would align with our AI Principles," Google told Bloomberg. But it admitted it had also determined it wasn’t certified to do such government work.