Eric Schmidt steps down as chairman of Google parent Alphabet

Google’s Secretary of State heads into the sunset

Eric Schmidt is stepping down from his role as chairman of Alphabet, the corporate parent of online search, advertising and cloud giant Google.

Schmidt, who will remain a technical advisor and continue to serve on the board, spent a decade as CEO of Google from 2001 to 2011, helping transform it into the world’s most valuable Internet business. 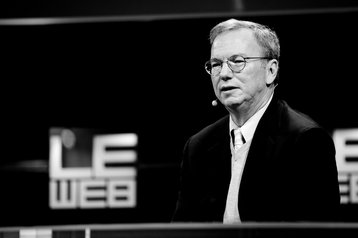 “Larry [Page, Alphabet CEO], Sergey [Brin, Google co-founder], Sundar [Pichai, Google CEO] and I all believe that the time is right in Alphabet’s evolution for this transition,” Schmidt said in a statement.

“The Alphabet structure is working well, and Google and the Other Bets are thriving. In recent years, I’ve been spending a lot of my time on science and technology issues, and philanthropy, and I plan to expand that work.”

Page added: “Since 2001, Eric has provided us with business and engineering expertise and a clear vision about the future of technology.

“Continuing his 17 years of service to the company, he’ll now be helping us as a technical advisor on science and technology issues. I’m incredibly excited about the progress our companies are making, and about the strong leaders who are driving that innovation.”

The departure marks the end of a 17-year triumvirate between co-founders Page and Brin, and Schmidt, who was previously the CEO of software and services company Novell (now a division of Micro Focus).

Schmidt was brought on to provide “adult supervision” after early-Google investors insisted the company had someone with experience at the helm, rather than two founders in their twenties. Page and Brin originally resisted attempts at oversight, delaying meeting potential CEOs, but warmed to Schmidt due to his extensive technical knowledge and the fact that he joined them at Burning Man.

Under Schmidt, Google went public, to become a $200 billion goliath with 24,000 employees. He stepped down in 2011, with Ken Auletta, author of Googled: The End of the World As We Know It, claiming that one of the reasons for his departure was that Page and Brin decided to leave the Chinese market over censorship and hacking concerns, against Schmidt’s advice.

Over the years, Schmidt served as both advisor to Larry Page and current Google CEO Sundar Pichai, and as Google’s Secretary of State - as he was reportedly referred to internally by some employees.

“He did a lot of that important public-facing work on behalf of the company,” John Battelle, author of The Search: How Google And Its Rivals Rewrote The Rules Of Business And Transformed Our Culture, told The New York Times.

“At a moment when the world needs to have more conversations with Google about its growing power and influence, my question is not why is Eric stepping down. It’s who is going to fill the void.”

Whilst in Iraq, he met Jared Cohen, who served as a member of the Secretary of State’s Policy Planning Staff, an advisor to Condoleezza Rice, and later Hillary Clinton. Schmidt hired Cohen to run the think tank Google Ideas, now known as Alphabet subsidiary Jigsaw. Together they published the book The New Digital Age: Re-shaping the Future of People, Nations and Business.

Schmidt currently serves on numerous business and charitable organization boards, including, but not limited to Carnegie Mellon University, Princeton University, the Khan Academy and The Economist. He is a member of the Bilderberg Group, the Trilateral Commission, the International Advisory Board at the Blavatnik School of Government and the Berggruen Institute’s 21st Century Council.

He is currently chairman of the US Department of Defense Innovation Advisory Board, that helps the military embrace new technological advances, including cloud services.

But Schmidt’s close ties to political figures backfired with the election of Donald Trump as the President in November 2016. Schmidt had backed Hillary Clinton, funding Timshel and The Groundwork, big data teams that helped her campaign. On election night, he was spotted wearing a Clinton staff badge.

President Trump is believed to have reacted negatively to the suggestion that a senior Google employee worked against him during the election, and Schmidt’s influence in Washington is thought to have diminished significantly as a result. People familiar with the company told The New York Times that Google has had more luck with more Republican-leaning hires.

Those include Susan Molinari, a former Republican Congresswoman from New York, who serves as vice president for public policy at Google, and Max Pappas, who joined the Google public policy team earlier this year after working for Senator Ted Cruz and Super PACs tied to Charles and David Koch.

People familiar with the matter told the NYT that this diminished influence, along with Google’s changing leadership and Schmidt’s own personal gaffes, were a factor in his departure. The company is currently searching for a new chairman.

As for what Schmidt will be doing with his spare time, he said on Twitter: “After ten years as CEO and seven as Executive Chairman, I can’t wait to dive into the latest in science, technology, and philanthropy.  I look forward to working with Larry and Sergey on our future here at Alphabet.”

He may also have other plans. In a profile of Jigsaw, Jared Cohen told Fast Company: “Oh, well, when Eric travels, he likes to go see data centers.”