Pai is down on being down

In a Twitter post, Chairman Ajit Pai claimed that the Federal Communications Commission will launch an investigation into T-Mobile.

The head of the FCC called the major T-Mobile outage earlier this week "unacceptable," after customers were unable to use voice and some data services for several hours. The issue also impacted other carriers when customers tried to contact T-Mobile subscribers.

Understanding the cause of the outage 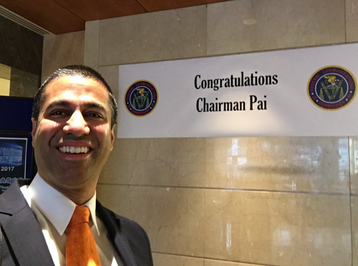 "The T-Mobile network outage is unacceptable," Pai said. "The FCC is launching an investigation. We're demanding answers - and so are American consumers."

Yesterday, T-Mobile's president of technology Neville Ray blamed the outage on "a leased fiber circuit failure from a third-party provider in the Southeast," adding that redundancy systems failed "and resulted in an overload situation that was then compounded by other factors. This overload resulted in an IP traffic storm that spread from the Southeast to create significant capacity issues across the IMS (IP multimedia Subsystem) core network that supports VoLTE calls."

The company promised a deeper internal investigation to understand "the cause of the initial overload failure," and said it would take steps to stop the outage happening again.

It is not clear exactly what form the investigation will take, and we have asked the FCC for clarification. The government agency previously fined AT&T $5.25m in 2018 and CenturyLink $400,000 in 2019 for outages - but only because it dropped emergency calls.

A major 2018 CenturyLink outage resulted in no fine, with the FCC nominally deciding whether to issue penalties based on who is at fault for the failure.

Last year, the FCC approved a $26 billion merger between T-Mobile and Sprint, making the company one of the country's three big carriers, along with AT&T and Verizon.