The true ramifications of President Trump’s travel ban on seven Muslim-majority nations will likely take some time to manifest, but it has already had an immediate impact on the technology world.

Yesterday, we covered much of the Silicon Valley’s response to the ban, and today we look at the reaction of Equinix, ICANN, IETF, and more. 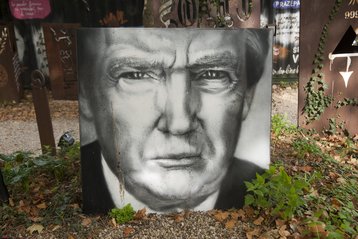 Steve Smith, CEO of carrier-neutral data center and Internet exchange operator Equinix, said in a blog post that the company has managed to grow because it drew “from a truly global set of backgrounds, perspectives and values.

“Without this diverse team, Equinix wouldn’t succeed,” he said.

With this in mind, he added: “Perhaps there’s never been a more important time to note this truth, as many of our employees are learning about a new presidential order in the United States.

“Last week, the US administration moved to temporarily ban immigrants and visitors from seven countries from entering the US. This order has generated a lot of concern among many of us, including many immigrants working in the United States.”

Equinix does not believe any of its employees are directly impacted by the policy (unlike Google and Microsoft), but will continue to check and offer assistance if they are.

“In the meantime,” Smith continued, “rest assured that Equinix is a place where every employee belongs. The contributions of our diverse employee population will remain absolutely crucial enablers of our success at Equinix. We will continue to advocate for thoughtful, ethical immigration policies around the world, and we will continue to work to assist our people.”

Elsewhere, Motherboard reports that two members of the US-based DNS-maintaining nonprofit Internet Corporation for Assigned Names and Numbers (ICANN) have been affected by the ban.

One board member, Kaveh Ranjbar, cannot enter the country, while the chair of noncommercial users constituency at ICANN, Farzaneh Badiei, essentially cannot leave.

Ranjbar, who is also the CIO of the nonprofit Dutch regional Internet registry RIPE NCC, wrote on Facebook: “As one of 20 ICANN Board members, I was supposed to land at LAX right now, but instead, I am in Amsterdam.

“I have both Iranian and Dutch nationalities and passports and I even have a multiple entry US visa in my Dutch passport but [apparently] none of that matters! Being born in Tehran means that at least for the next 90 days, I can’t get into the US. This also means I will miss Chicago IETF, where I am being officially appointed as IAB’s liaison to the IAOC.”

Badiei is currently in the US on a multiple-entry visa as a research scholar, where she serves as the executive director of the Internet Governance Project. But the Iranian-born associate researcher at the Georgia Institute of Technology fears that should she leave for the March 2017 ICANN community forum in Copenhagen (which she was meant to chair), she would not be allowed back in.

With Ranjbar and other members of the Internet protocols-group The Internet Engineering Task Force (IETF) affected, the group’s three chairs wrote a joint blog post about the ban.

They said: “The IETF does not make comments on political matters. But we do comment on topics that affect the IETF and the Internet. Specifically, the recent action by the United States government to bar entry by individuals from specific nations raises concerns for us - not only because upcoming IETF meetings are currently scheduled to take place in the US, but also because the action raises uncertainty about the ability of US-based IETF participants to travel to and return from IETF meetings held outside the United States.”

Continuing: “Our next meeting is planned for Chicago, and we believe it is too late to change that venue… [but] we are already reviewing what to do as far as location for the next open North American meeting slot.”

Elsewhere in the tech world, Buzzfeed reports that Obama and Clinton confidante and executive chairman of Google’s parent Alphabet, Eric Schmidt, had some choice words for the ban and the administration.

Schmidt, who has met Trump at least twice, allegedly told an audience of Google employees that the Trump administration is “going to do these evil things as they’ve done in the immigration area and perhaps some others.”

He continued: “But the core focus is going to be to get the growth rate in the country - which is roughly one and a half to two percent - up another point by simply pushing through increases in federal spending and overcoming the Tea Party.”

Vice News reports that he also said: “These prejudicial actions are discriminatory and anti-globalization, and I did everything I could to cause a different outcome. There are limits to what we can do, there’s no question if the company is asked to do something that’s counter to our values, we would oppose it and actively fight it.”

Schmidt previously served as an informal policy adviser to the President, a member of Obama’s transition advisory board, and a member of the United States President’s Council of Advisors on Science and Technology. Google as a whole saw an unparalleled number of its employees join the White House, including Google VP Megan Smith, who became Chief Technology Officer of the United States under Obama.

With the new administration, however, things have been far more difficult. In an interview with The New York Times, Trump backer Peter Thiel, who is thought to be the President’s closest advisor on matters of technology, was asked to confirm or deny whether ‘Google had too much power in the Obama administration.’

He said: “Confirm. Google had more power under Obama than Exxon had under Bush 43.”

Thiel is thought to be leading Trump’s search for two antitrust positions, and is maneuvering for candidates that differ from Google’s preferred choice, believed to be Joshua Wright.

Another key Trump advisor, Steve Bannon, is believed to have complained about Schmidt’s funding of a data analytics start-up called The Groundwork, which helped the Clinton campaign, The New York Times reports. The paper also reports that former senior adviser for Trump’s campaign, Barry Bennet, said that Trump’s team suspected Google was skewing search results in favor of Clinton.

In September, Trump told a crowd that “Google search engine was suppressing the bad news about Hillary Clinton.”

Prior to the travel ban, Google had sought to improve its standing among Republicans. While it has spent heavily on lobbying both major parties, it has generally been seen as a pro-Democrat company. The New York Times reports that after Trump’s election, Google financed a gala at the Smithsonian Arts and Industries Building featuring roughly 70 primarily-Republican lawmakers.

Google also posted a job opening for a “conservative outreach” employee in its Washington lobbying office in December. Prior to his first meeting with Trump, Schmidt met with House majority leader Kevin McCarthy, and Republican Senator John Thune, chairman of the Commerce, Science and Transportation Committee.