Facebook is spending $800 million on a data center in Tennessee

Facebook has started construction on an 800-acre plot of land in Tennessee, set to become a data center complex covering nearly a million square feet.

The site in Gallatin, a city with around 43,000 residents located 30 miles northeast of downtown Nashville, will be powered by 220MW of renewable energy sourced from nearby solar farms.

The existence of the development has been known for a while: in May, DCD reported that the Gallatin City Council voted on a resolution giving permission for the city to enter into a water and sewer contract with Woolhawk LLC, an alias previously used by Facebook, to supply "a multi-year large scale project… with uses of one or more data centers.”

The official announcement was made in a guest column in the Tennessean, written by Facebook’s COO Sheryl Sandberg. 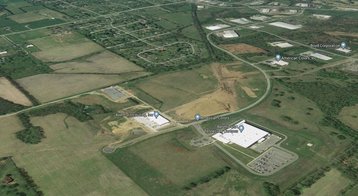 “Nashville is a special place - and it is a community we want to be part of,” Sandberg wrote, in a post peppered with mentions of local businesses, charities, and events.

“Data centers are Facebook’s engine room - state of the art technological hubs that store, process and protect the information that powers our platform.

“The Gallatin center will be one of our most advanced yet – powered by renewable energy and supporting more than 100 high-skilled and well-paid jobs. Alongside the center we’re also investing in two solar energy projects in Lincoln and Madison counties.”

Construction is expected to take three years and temporarily employ about 1,100 people, with the resulting buildings being LEED Gold certified.

Facebook’s neighbors on the site will include gun manufacturer Beretta, Gap, SERVPRO, and American Colors.

"For every one data center job we create, we create five jobs in community services, food or housing," Sandberg told the Tennessean. "It's a massive construction project, a massive investment for two to three years. Then there are the ongoing jobs. We take our responsibility in the local community really seriously."

"This is something we have worked for decades - to have this kind of monumental investment," Gallatin Mayor Paige Brown added.

Gallatin previously bid for a Facebook data center three years ago - but on that occasion, the company chose to build in Huntsville, Alabama. The project was paused in March due to the impact of Covid-19.

The alleged economic benefits of hyperscale projects for small communities, extolled by Sandberg, are the subject of intense debate; according to BizJournals, in order to secure the project, city officials approved 20 years of tax breaks for the company, forgoing as much as $19.5 million in potential revenue.

In 2016, policy think tank Good Jobs First criticized local and state governments in the US for being too generous with subsidies for data center projects, estimating that some ended up paying as much as $2 million for every data center job created.

Business Oregon, the state’s primary economic development agency, received similar criticism: the auditors found that in 2015, for each data center job the tax breaks brought in, local communities gave up property tax revenue between $87,000 and $800,000. But, local governments argue, if they don't offer enticing incentives, neighboring communities will.