South Dublin County Council (SDCC) is to comply with the government’s order to scrap plans to ban data centers in the region.

The Business Post reported that Danny McLoughlin, the council’s chief executive, has told the council to change the zoning of data centers to ‘open for consideration’ in its development plan, opposing councilors' previous call to zone them as ‘not permitted’. 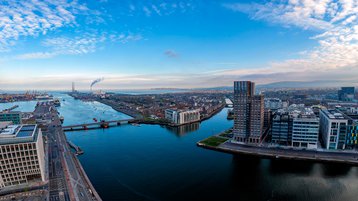 This move effectively means that the local authority is folding to the ministerial order given in August 2022 by the Minister of State at the Department of Housing Peter Burke to allow data center developments, and removes any possibility of the council bringing a High Court challenge against the order.

The ministerial order was previously opposed by councilors and politicians including Eion Ó Broin, the Sinn Féin TD, who said it undermined the democratic mandate of the council.

Calls to place a ban on data centers in the area arose in the County Development Plan (2022-2028) draft and came from concerns over the quantity already located in the local authority area - more than half of the country’s total of 70 data centers - and the environmental and energy implications these facilities could have.

Madeleine Johanson, the People Before Profit councilor who introduced the proposal, described the decision to overturn the ban as ‘very disappointing from a democratic perspective’. 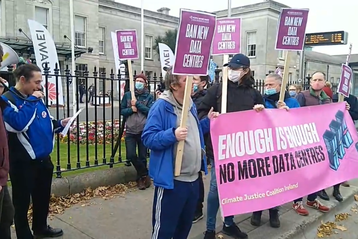 “We are just being overridden by the minister on this, and not, I think, on very solid grounds,” she said.

People Before Profit recently staged a protest at the Data Centres Ireland trade show in Dublin, arguing that data centers were already using 12 percent of the country’s electricity and any increase would render Ireland’s climate goals impossible. The party also marched on the planning department's building after the original request to overturn the ban was made.

Echelon Data Centers had filed a legal challenge against the local ban, and was later joined by EdgeConneX, CyrusOne, and Vantage Data Centers.

Despite the council folding to the ministerial order, Dublin will remain in a de facto moratorium as EirGrid stated that no new data centers are likely to be granted a grid connection in the area until 2028.