Developers have begun offering land for sale or lease on a proposed data center campus near outside Cambridge, UK.

According to a listing on Realla and a dedicated site, plots at the 43-acre Camro Data Park are immediately available for sale or to let. The site is within the Elean Business Park next to Sutton in Cambridgeshire. 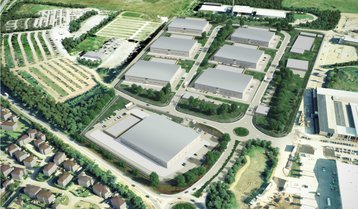 The Camro site has planning permission for 65,000 sqm (700,000 sq ft) with for data center buildings (Use Class B1). The listing notes Reserved matters have been discharged (ref no: 13/00487/RMM) for a first phase of up to 89,910 sq ft and 9MW of data center space to enable quick delivery, with the rest of the site available as a phased delivery.

An on-site substation is live and able to deliver 6MVA, with a further 19MVA available.

David Adams of Adams Group Real Estate said the site had recently gained permission for a ‘new configuration.’ He told DCD there is an additional 50-acre site adjacent to the advertised park, meaning there is potential for up to 90 acres of data centers on the site, but only the first 40-acres currently have planning permission.

Previously known as the Elean Data Campus, property developer Lasercharm first filed a planning application with East Cambridgeshire District Council (ECDC) back in 2007. The last update from the site was in 2017.

According to filings with East Cambridgeshire District Council, Lasercham this month filed for Reserved matters of a previously approved application from 2011, which itself was the extension of the original 2007 application.

Prior to Lasercharm’s involvement, planning permission was originally granted on the site in August 2003 to previous owners for a 2.2 million square feet data center.

Previous iterations of the plans proposed up to six two-story buildings on the site offering up to 72MW. 5Nines was also previously part of the project around 2009 and prior to it being acquired by Serverfarm in 2019.

The campus is on land formerly a part of Mepal Airfield, a Second World War airbase, latterly as a Thor ICBM base in the 1960s.

The site is also neighboring the 38MW Elean a straw-fired biomass power station. The park’s on-site substation is supplied from Sutton Power Station to the north and from Histon grid to the south, but notes there is planning permission for an on-site energy center and up to 10MW solar array and battery storage.

Update: DataQube has reached out to DCD to inform us the company is working with Lasercharm and is the team lead on the project.

"There's a number of ongoing discussions with end-users," said David Keegan, Group CEO of DataQube. "We've had a lot of interest from the market."

UK-based DataQube is known for making unattended data center cabinets that are more flexible than those based on the standard ISO shipping container size. However, the company told DCD it is also involved in a number of hyperscale projects.

"We're not just a product supplier. Our USP is we offer a whole raft of services," he added. "For example in Ireland, we're managing the whole process. That's is due to go to planning in the next few months; that project's phase one is around 36MW."