Speaking at DCD>Energy Smart, senior corporate campaigner for Greenpeace, Gary Cook, said that the IT and data center sectors have made a lot of progress but there are still challenges ahead for the industry.

As keynote speaker for the Stockholm event, Cook gave a progress report on the current state of renewable energy in the data center sector, ten years after Greenpeace started looking into the industry. 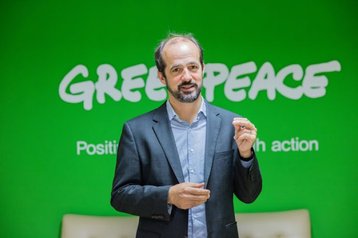 Cook said: "We have seen increasing action by a number of companies to address the supply of energy outside the data center.

"Powering data center infrastructure with existing sources is really going to take us in the opposite direction from where we need to be as a global society. To move towards a grid completely powered by renewables this sector needs to be pushing governments to say we want renewable energy as it is critical for our business, we need to be getting in the policy space as well as the procurement space."

The senior campaigner stressed that data center providers and operators must be doing more that buying existing renewable energy credits from the grid, they have to be entering into more power purchase agreements (PPAs) to "drive a new supply of renewable energy."

Cook argued that by entering into renewable PPAs that the IT and data center industries can push utility providers into the renewable marketplace and create a new demand for clean energy.

"The IT sector is a leader in not taking the easy way out and buying existing energy credits. Half of renewable energy deals are coming from the IT sector, that gives real credit to people who are taking this challenge to try and build a digital infrastructure with renewable powers seriously and continue to focus on that goal."

He stressed that as a planet we are currently on track to see the global temperatures rise by four degrees. Such a increase in temperature would have catastrophic effects. In particular Cook mentioned this would create a high likelihood of the Himalayan ice shelves melting, which could cause a humanitarian disasters in China.

Cook also mentioned that Greenpeace is currently looking into the environmental impact that data center manufacturing suppliers are having on the planet.

Speaking afterwards, Uptime Institute's Andy Lawrence noted how things have changed. "Ten years ago we invited Gary Cook to a conference and it was like having Theresa May at a EU meeting," he said. "Everyone was polite, but no one wanted a photo opportunity."