Cloud computing giant AWS made a commitment to 100 percent renewable energy for its data centers back in 2014, but the Clicking Clean Virginia report from Greenpeace claims that the company still mostly relies on fossil fuels to power its operations in Virginia.

The report reveals that only 12 percent of AWS’ energy consumption in the state comes from renewable sources.

The company disputes the findings, calling them "inaccurate." 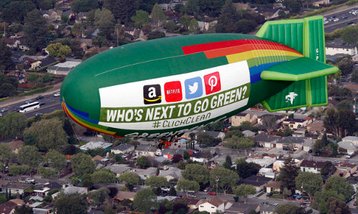 Of the 13 companies mentioned in the report, only Apple, Facebook and Microsoft seem to have made progress in securing a significant proportion of renewable energy in Virginia, which remains the country's most important data center market.

Apple achieved 100 percent renewable energy consumption in its facilities across the state; Facebook obtained 37 percent of the power it needs in Virginia from renewables, and Microsoft - 34 percent.

At present, power generation in Virginia is still dominated by fossil fuels, with less than five percent coming from renewable sources, lagging far behind other regions in the US. The largest producer of electric power for the Data Center Alley is Dominion Energy, and only four percent of the company’s output comes from renewable sources.

Amazon Web Services ranked as one of Dominion’s largest customers when it made its renewables pledge in late 2014, and analysis by Greenpeace shows the company has tripled its data center operations in Virginia since.

Greenpeace explained that although AWS purchased a sizeable amount of renewable energy locally in 2015-2016, this was dwarfed by the additional energy supply needed for new projects in the area.

“Unless Amazon and other cloud giants in Virginia change course, our growing use of the Internet could lead to more pipelines, more pollution and more problems for our climate.”

In response to the report, an AWS spokesperson said: “Greenpeace has chosen to report inaccurate data about the energy consumption and renewable mix of AWS’s infrastructure and did not perform proper due-diligence by fact checking with AWS before publishing.”

“Greenpeace’s estimates overstate both AWS’s current and projected energy usage. Additionally, the report does not properly highlight that AWS has been a major investor in solar projects across the Commonwealth of Virginia and played a leading role in making it easier for us and other companies to bring more renewable energy to Virginia through our Market-Based Rate with Dominion Virginia Power.”

Speaking to DCD in August last year, Gary Cook, senior corporate campaigner for Greenpeace, said: “Unfortunately, AWS still refuses to provide the first data point on what's the numerator of their energy demand, upon which these projects would indicate their renewable energy progress.”

“Our own estimates of their footprint last year indicated that their growth was far outstripping their growth in data center capacity, which continues to grow dramatically even in Virginia, where they are already massive.”

Gary Cook is a keynote speaker at this year's DCD>Energy Smart event in Stockholm.

A global Clicking Clean report is expected to released in the first half of 2019.