Facebook is helping fund 437MW of solar power in the states of Oregon and Utah, some of which will power its veteran Prineville data center.

The deal between Facebook and Pacific Power, announced at a press conference in Prineville on Wednesday, will place 100MW of solar capacity close to the city, boosting Oregon’s solar output by 20 percent. The remainder will be located 800 miles away, in Utah.

Facebook is setting up power-purchase agreements in which it will pay for renewable energy credits, lowering the utility’s up-front costs, according to a report on Oregon news site The Bulletin. 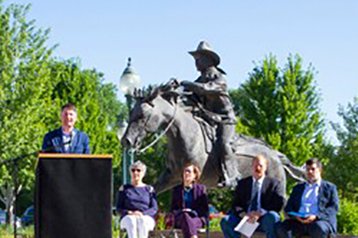 The companies did not reveal the financial details of the deal, but Facebook’s agreement to pay for solar output means its first data center, which opened in Prineville in 2011, will be effectively powered by energy from renewable sources, said Peter Freed, Facebook’s energy strategy manager.

Facebook is following Apple, which purchased land and funded 50MW of solar capacity in Oregon for its data centers in Prineville in 2017.

This is a big change from 2010, when Greenpeace criticized Facebook for choosing Prineville, specifically because of Pacific Power’s heavy reliance on coal-fired power stations.

The latest deal, which follows an agreement with the Oregon Public Utility Commission in 2017, should improve the image of Oregon’s power utilities, and increase the availability of renewable power in areas across the Western US, served by Pacific Power.

“This partnership bolsters Prineville’s 21st century model for a small-town,” Governor Brown said. “With projects like these, we continue to demonstrate that Oregon is ready for the clean energy economy of the future.”

Local news organizations praised the effect of the Facebook data center on the area, citing unemployment rates which have fallen from 17 percent in 2011 to 6.5 percent today. However, the tax breaks offered to the giants have also been criticized. At the end of 2017, local TV station KTVZ claimed that the generous deals offered by the authorities had cost the state $102 million in lost tax revenue.

“We are expanding from our timber roots to a future with greater business diversity and a workforce with broader skills,” Prineville Mayor Betty Jean Roppe said.

“We view this partnership as a way for Facebook to meet its sustainability goals and for Prineville and its neighboring Central Oregon communities to grow and thrive, while delivering cost-effective resources to all of our customers,” added Stefan Bird, president and CEO of Pacific Power.

The announcement comes at a period of rapid expansion for Facebook. Two more data centers have been announced in Prineville, due to open in 2020 and 2021, taking the Facebook campus from 1.25 million square feet (116,128 sq m) to more than two million square feet. According to The Bulletin, the solar farms will be built by Chicago-based Invenergy.