Data center cooling has evolved, so should design 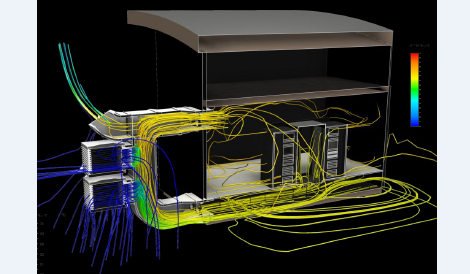 Re-circulation: Typically caused by poor rack hygiene and insufficient cool air available at the face of the rack, hot exhaust air can find its way back into server air intakes, heating IT equipment to potentially dangerous temperatures.

Air stratification: In an attempt to provide cooler air at the top of the face of the rack, the natural tendency of air to mass in different temperature-based layers can force set points on precision cooling equipment to be lower than recommended. Often, in attempts to remediate air stratification, technicians increase the fan speed of CRAC units to deliver more cool air to the room, which can result in bypass air.

Bypass air: The velocity of the cool air stream exceeds the ability of the server fans to draw in the cool air; as a result the cool air shoots beyond the face of the IT rack.  Cool supply air can join the return air stream before passing through servers, weakening cooling efficiency.

Eager to combat the inefficiencies above and keep pace with steadily climbing data center temperatures, businesses often adopt hot aisle/cold aisle rack orientation arrangements, in which only hot air exhausts and cool air intakes face each other in a given row of server racks.

This flaw eventually led to the introduction of containment cooling strategies. Designed to organize and control air streams, containment solutions enclose server racks in sealed structures that capture hot exhaust air, vent it to the CRAC units and then deliver chilled air directly to the server equipment’s air intakes. The end result is a series of important benefits:

Increased reliability: Eliminating re-circulation spares servers from exposure to potentially dangerous warm air that can result in thermal stress which decreases life of IT equipment

Despite the revolutionary impact of containment strategies on data center cooling, most organizations continue to plan new computing facilities the same way they always have. First they design a building and devote some of it to the data hall, or white space. Then they fill the white space with as many server racks as it will hold.

Designing data centers in that traditional manner can create a wide range of problems. For example, an undersized or oversized power and cooling infrastructure can limit operating capacity or increase capital expenses. Inconveniently located structural elements can force containment ducts to bend and detour in ways that reduce their efficiency, and inadequate room dimensions can complicate server rack placement and produce wasted floor space.

As a result, companies are increasingly recognizing the wisdom of designing data centers not from the walls in but from the server rack out. Instead of building a room and then filling it with racks, they’re selecting the ideal racks for their needs and designing the room around them. Instead of under- or overprovisioning their new facility’s power and cooling resources, they’re installing the optimal infrastructure for the precise array of hardware and enclosures that they’ll be using. Instead of improvising solutions to efficiency-sapping structural defects, they’re preventing those defects from occurring in the first place. The end result is a data center that’s not only less costly to cool and maintain, but more reliable and better suited to business requirements.