The company, which operates as a semi-independent subsidiary, came out of the same DARPA self-driving challenge that led to the creation of Google's self-driving car project, now known as Waymo. Before shifting to trucks, Torc developed autonomous systems for the US military. 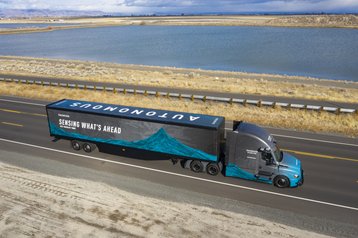 Torc’s test fleet in New Mexico is currently generating petabytes of data from tests on public roads, with further deployments planned in Virginia.

"AWS is an ideal platform for the ingest, storage, and post-processing of massive amounts of data collected by our on-road test fleet,” Ben Hastings, Torc’s CTO, said.

Amazon's cloud will also be used to run Torc's simulated self-driving tests. “Our software is tested in simulation using a combination of synthetic scenarios and replayed sensor data,” Hastings said.

“These tests often stack up in ways that create significant peak demands for compute resources. With AWS, we get a solution that can dynamically scale to meet the needs of the engineering and virtual testing teams without having to acquire and maintain our own data centers.”

Wendy Bauer, director of automotive sales at AWS, added: “By pairing Torc’s industry-leading technology with AWS’s reliability, security, and deep expertise in autonomous vehicle development, Torc is positioned to remain a leader and introduce the benefits of self-driving trucks to society.”

Daimler has funded Torc with the idea of developing autonomous capabilities in-house. But last year, the German company announced it would hedge its bets.

The Google sister company is one of the earliest self-driving companies and among the best-funded. It branched out into trucks in 2018, and has trialed using them to resupply data centers.

"This partnership complements Daimler Trucks’ dual strategy approach, of working with two strong partners [Waymo and Torc] to deliver autonomous L4 solutions that are seamlessly integrated with our best-in-class trucks, to our customers," Martin Daum, board chairman at Daimler Truck, said at the time.

Completing the holy trinity of big tech, Daimler also works with Microsoft. Outside of Torc, its primary cloud provider appears to be Azure.

The business, which also operates its own data center footprint, first began to shift to Azure in 2019.