Highlander is following up its prototype with a live test

China Telecom is processing live business applications in an underwater data center off the coast of the Hainan Free Trade Port in China.

This latest stage of the series of Highlander tests introduces government-support, and the involvement of Amazon's Chinese partner in plans to develop a live seabed data center consisting of 100 modules.

In a test launched on May 31, Highlander used the same container it had successfully tested underwater in January. This test will be evaluated by the Chinese government's Cloud Computing & Big Data Research Institute (CCBDRI), to assess the potential for underwater facilities in reducing the environmental impact of data centers. A report is expected in July. 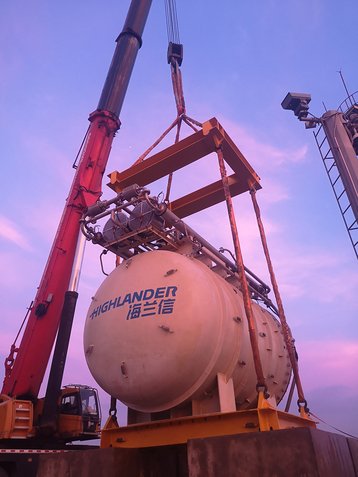 "The prototype was renovated and furnished with servers, firewalls, UPS, etc and shipped to Hainan," a Highlander spokesperson told DCD, "then deployed on May 31 with China Telecom (Hainan) live business applications running for a test which is being evaluated by Cloud Computing & Big Data Research Institute (CCBDRI). Later, CCBDRI will issue a test report regarding the performance of IT facilities, Cloud computing, and network related."

The airtight pressure vessel contains four racks and was first tested close to Hong Kong at Zhuhai Port. Highlander followed this up with an event on May 21 in Haikou with government representatives and executives from companies including Sinnet, China Telecom (Hainan), and Lenovo, which detailed plans for a fleet of 100 similar data center modules working together on the sea bed close to the Changjiang Nuclear Power Plant.

Highlander's project aims to use seawater for cooling, saving energy, and improving efficiency, while avoiding the use of scarce land in populated coastal areas. Last year Microsoft reported that Project Natick had successfully run a twelve-rack facility off the coast of Scotland for two years without interruption, saving on cooling and maintenance.

This time, the vessel has been deployed at a different port, according to Highlander sources. "Now, our target is to have a 60 day running of the prototype to verify the concept of the underwater data center," he told DCD in a phone call.

According to a Highlander spokesperson, the CCDBRI, a government-backed third party, will assess the test: "CCBDRI is a high-level third party evaluator. A report will be generated in early July, to evaluate network performance, evaluate the It facilities and their performance in the prototype." 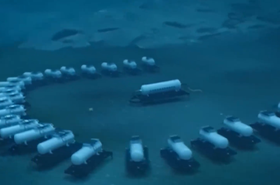 China to push ahead with commercial underwater data centers in Hainan, 100 promised

As part of the development of the project, Hainan's Assets Supervision and Administrative Commission (SASAC) will become an equity holder in Highlander's Hi Cloud subsidiary.

The project also involves Beijing Sinnet, which operates as Amazon's domestic partner in China, running the cloud provider's data centers in the country.

"One of our big cards is government support," said our contact. "Our president has promised to reach the peak of carbon emissions and to step into the era of carbon neutral as early as possible; if you use the underwater solution of course it can be even faster."

However, he pointed out that underwater data centers do have difficulties: "Anything related with the ocean is expensive. that's one thing."

While Microsoft reported using fans to circulate cooling, Highlander's solution uses passive flows as much as possible to reduce energy use; "We are sticking to passive cooling so that as little active cooling is involved to save energy."

Also, the hybrid power and data cable has to be protected close to a busy port, said the spokesperson: "Think about the distance to the shore. There's a length of hybrid cable, and you have to bury it."

After Hainan Free Trade Port, Highlander has said it plans to propose underwater facilities at other locations including the Guangdong-Hong Kong-Macao Greater Bay Area, the Yangtze River Delta, and the Bohai Rim Economic Circle.