Funding will come over a decade, joining a number of supercomputing efforts for the SKA

The Australian government will spend $64.4 million on a new supercomputer in Perth to process and analyze data from the Square Kilometre Array (SKA) radio telescope.

The world’s largest public science data project, the SKA will be huge in scope, cost, and output. Receiving stations will extend at least 3,000 kilometers (1,900 mi) from a concentrated core, and span across both Australia and South Africa.

Initial construction began in 2018, but observations from the fully completed array are not expected until 2027 - with a history of delays suggesting that that could be pushed back.

All those sensors will produce enormous quantities of data - more than all of the Internet back in 2013. This causes issues for real-time processing, transfer, storage, and compute. To cope, a multifaceted computing initiative is underway to build systems capable of handling the extreme quantities of data.

Understanding the history of the universe requires a lot of compute 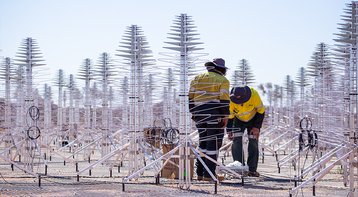 Australia's upcoming supercomputer will help form a core part of that computational infrastructure. The system will work with another in Cape Town, with the two together known as the Science Data Processor. The combined SDP will be capable of 250 petaflops of peak performance.

Precursor telescopes MWA and ASKAP already use a 546 teraflops supercomputer at Pawsey, while a 50 petaflops system launching next year will be used for the telescopes as well as wider scientific workloads. After processing, the data will also be shared with supercomputers from the 14 nations that are part of the SKA, as well as potentially those of the US - which left the project in 2011 after 20 years of involvement.

While the full SKA is not set to go live for at least another six years, 131,072 low-frequency Christmas tree-shaped antennas (pictured) are expected to be installed by the end of this year in Australia, along with another 197 mid-frequency dish-shaped antennas in Karoo.

“When the telescope is switched on, it will open the floodgates to a massive amount of data, as signals from all over the Universe pour in — it’s an enormous and very exciting challenge for us,” AusSRC director, Dr. Karen Lee-Waddell said.

After extensive on-site processing to compress data, "the flow of data will be roughly 100,000 times faster than your average home broadband speed. Each year, we’ll store around 600 petabytes coming from the SKA telescopes for astronomers and astrophysicists from all over the world to access and analyze."