With plans for a twin facility in Donegal, Ireland

The project will be located at Foyle Port Innovation Park on the outskirts of the second largest city in Northern Ireland, and the fourth largest city on the island. 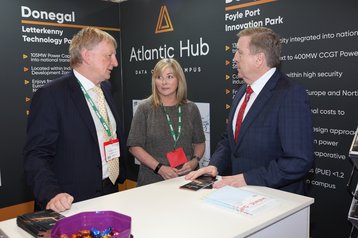 Two of a kind

The company has secured planning permission for the first phase of its Northern Irish data center and is now looking for approval for the entire site.

Once the project is completed, the campus is expected to operate with 300MW of power capacity supplied exclusively from renewable sources.

Atlantic Hub is working on a second site in Donegal, Ireland, which will match the Londonderry campus, with 300MW of capacity supplied by renewables.

Atlantic Hub says that the route presents the fastest connection between North America and Europe, offering 8Tbps of capacity with sub-59ms latency. The cable was completed during the spring of 2010 and was hailed as a significant piece of infrastructure for the north west of Ireland.

Speaking to the Derry Journal, Brian Doherty, managing director of Atlantic Hub, said the north west of the country was ideally positioned in terms of climate, energy and transatlantic links. “With data centers the fundamental criteria is power, connectivity, and climate, and Foyle Port is right beside Coolkeragh Power Station,” he said. “The site is ideal, it is just perfect.

“We are hoping to secure an anchor tenant over the next few months and we have had a lot of interest. We are hoping to have all the supporting infrastructure in place within 12 to 18 months and if we get a client before that, we will build out the data halls in parallel."