One of the top ten fastest supercomputers in the world

At 55.4 petaflops of peak performance, Dammam 7 is among the top ten most powerful supercomputers in the world. The system was built by Cray, a subsidiary of HPE. 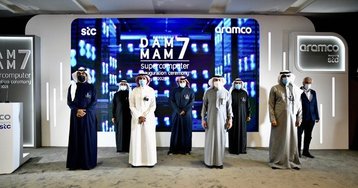 Named after the first oil well discovered in Saudi Arabia, Dammam 7 will help the world's largest producer of oil continue to search for fossil fuels by processing immense geophysical datasets.

Detailed 3D models will also help the company work out how to exploit known oil reserves in a safer and faster way, reducing the barrier to entry for further oil extraction. Aramco has rights to the world's second-largest proven crude oil reserves.

Dammam 7 "will help us with breakthroughs as part of our long term “Discovery and Recovery” strategy in our Upstream business," Aramco president and CEO Amin H. Nasser said.

"This technology that processes complex data faster will enable new discoveries and enhanced recoveries, which are crucial to both ensuring the availability of adequate supply to meet the demand for energy and to cut costs while boosting productivity."

This week, an investigation by Bloomberg found that Aramco appears to have massively underreported its carbon emissions, failing to disclose the output of many of its refineries and petrochemical plants.

In reality, the true emissions may nearly double, adding about 55 million metric tons of carbon dioxide. That's around Portugal's annual emissions for the entire nation.

Following the article, Aramco said that it would begin disclosing direct emissions from its full global operations later this year. A report by CDP and the Climate Accountability Institute found that Aramco was responsible for 4.5 percent of global industrial greenhouse gas emissions from 1988 to 2015.

The company in late December announced that it would partner with Google to offer cloud services in Saudi Arabia. Google representatives did not respond to questions about whether Aramco would be a customer of Google Cloud.

"Climate change will be our generation’s most profound challenge," Google CEO Sundar Pichai said in an op-ed for The Economist in November. "And in 2021, the world will take its biggest steps yet to meet it."