Most data center managers accept the scientific consensus, but a significant minority — primarily in the US — do not.

Across the globe, data center operators are under pressure to make data centers more sustainable. To this end, efforts are underway to reduce carbon emissions, water consumption and waste. The big, global and largely US-headquartered giants of the internet have made the boldest promises and have taken the most action to date.

But not every organization, or every manager, is equally motivated. Although the vast majority of data center and critical infrastructure managers accept the scientific consensus that climate change is real and is caused by human actions, a significant minority — primarily in the US — do not. 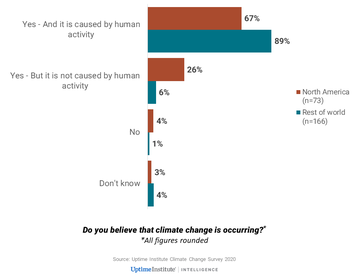 Overall, nearly a third of North American managers effectively think the big effort to reduce carbon emissions is a waste of time. Outside North America, the picture is markedly different: 89 percent of managers believe human activity is causing climate change. (In Europe, this proportion was 82 percent.)

To many, these numbers may be unsurprising. It is widely known there is greater skepticism about anthropogenic climate change in the US (although not in Canada) including, at the time of writing, at the presidential level. (The results are very similar when all categories of respondents in the data center ecosystem are included: operators, suppliers, designers and services companies.)

Globally, notwithstanding a small minority of skeptics, the results show strong acceptance of the scientific consensus and the need for action. But what about in the US? How will this difference in opinion affect the investments taken in the years ahead?

This will, of course, unfold over time, but the practical results of these attitudinal differences may be relatively minor. First, most US critical infrastructure managers, business leaders and investors (along with legislators) do believe in anthropogenic climate change, albeit by a smaller majority. For this reason, strong actions — by even reluctant managers — will still be required.

Secondly, the reduction of waste — whether of energy, water or equipment (through over utilization, under use or lack of re-use) — will, in most cases, reduce both carbon emissions and be economically beneficial over time. If one motivation is not strong enough, the other will be.