The City of Amsterdam has threatened to fine data centers which don't impose power management on data center servers, so they ramp power down when not in use. In response, the data center operators have said it's not their responsibility and offered to ask their customers to switch off servers they aren't using.

The row blew up after three years of stalled discussions, in which the Amsterdam authorities told data centers to save energy by putting all idle servers into "balanced mode". The industry bodies said their members could not do this, and talks ultimately broke down.

After the City went public with threats of fines, the Dutch Data Center Association (DDA) told DCD it would challenge any fines in court, alongside its offer to pass the request on to customers. 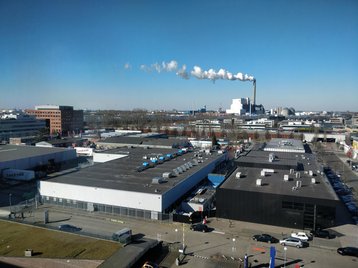 The Amsterdam argument dates back to 2019, when the municipalities of Amsterdam and Haarlemmermeer, announced a moratorium on new data center projects, saying they used more energy and land than the urban environments could afford. One year later, the ban was lifted with an agreement that data centers should be built in specific areas, and have a power usage effectiveness (PUE) of 1.2. It also added requirements for data centers to adopt free cooling and attempt to share their waste heat with district heating systems

Alongside these requirements, the demand to put idle servers into a power-saving mode has apparently been in place since 2019, but discussions to impose it have got nowhere. Last week, after DDA and DigitalNL refused to sign an agreement, the Amsterdam authorities announced that fines would be imposed.

"With this mandatory 'power management' 10 to 15 percent energy can be saved," said the announcement, which added that the local environment agency, OD NZKG, had tried to reach an agreement with the sector for more than a year.

Both sides blame the other for the talks' breakdown. The City authorities' release said the local data center bodies "refused to sign at the last minute", while Stijn Grove, managing director of the DDA said the Environmental Inspectors "walked out a week before the initiative."

Amsterdam has now asked OD NZKG to enforce the legal obligation, monitoring data centers and fining them if they don't change the settings on servers.

“Unfortunately, we have not been able to reach a Power Management Sector Agreement that would lead to significant energy savings," said Alderman Marieke van Doorninck (spatial development and sustainability). "I have therefore requested the OD NZKG to enforce unnecessary energy wastage by data centers. In doing so, we are looking for cooperation with the other municipalities and provinces, so that there is a level playing field in the Netherlands.”

The announcement says that as soon as idle servers are put into sleep mode, "less water needs to be cooled, which saves electricity and cooling water." It also says that the measure would not affect service users: "The energy-efficient setting of the server works like the sleep mode of your computer: with a tap on your space bar, everything is back in view. For users, that means a delay of less than a millionth of a second. They don't notice this."

In response, the two bodies have explained that using efficient server energy settings is "logical", and appears on the Recognized Measures List (EML) for data center energy saving, published by the Netherlands Enterprise Agency (RVO).

However, both groups say they represent service providers, and their members' hands are tied, because the server settings are in the hands of the server owners: "Only the owner of the server can take the measure."

"For the last two years we have been working with the national government and Environmental Inspectors (of the Amsterdam region) on a policy regarding server settings," Grove told DCD. "We have stated in this process that on legal and also technical terms, colocation data centers are no party in this as we do not own or control or have knowledge of the IT equipment. Our customers have this responsibility."

Faced with the threat of fines, the trade bodies have come up with a compromise proposal, which amounts to a promise that the data center providers will simply pass on the authorities' request to their customers. The detailed proposal is not yet published, but Grove says the proposal "has been ready for a long time", and was always planned to be launched this month.

The proposal, signed by a long list of Dutch data center providers, along with international giants such as Digitial Realty and Equinix, says service providers will "personally draw attention to the need to take these measures" and ask customers to sign a declaration which says they are aware of the use of server settings to save energy. The data center customers will be asked to promise to make an inventory of settings and adjust them as necessary.

“We are working on many fronts to facilitate digital innovation in a sustainable way. We see energy savings through power management as a welcome addition to help our customers improve in terms of sustainability," said Jan-Joris van Dijk, managing director of DDA/DigitalNL member and service provider Bytesnet.

The two bodies also "call on everyone to put new servers in balanced mode immediately upon installation," asking server manufacturers and ICT service providers to deliver servers that default to optimal energy savings.

They also complained about the government's confusion, asking for "much clearer" legislation, saying: "We want to know exactly what the government expects from the owner and manager of server equipment, and what it expects from data centers. The legislation must be fundamentally revised: the owner and manager of the servers must be directly accountable for the energy-saving measures that he must take."

Grove told DCD: "We are fully confident that we are right in this. We can only let our customers know that this legislation exists in the Netherlands and that they are aware. This is confirmed by several independent legal firms who investigated the issue on our request."

If the authorities do attempt to impose fines, the industry would go to court, he said, saying this would "become a legal case which we take on as a unified sector."

Update: In response to a request from DCD, ODNKZG sent the following statement, setting out its side of the breakdown of discussion, and the reason for their urgency: "Since 2019 there is a national obligation on smaller datacentres in the Netherlands to apply power management -balanced mode- to the servers, among other things. In 2023, this obligation will be extended to large and very large datacentres. During the EZK event 'Partners in energy challenges 2022' on January 27th recently, the Sector Agreement on the application of power management was to be ceremoniously signed by all parties. However, the day before the signing, the sector representatives withdrew. Very disappointing.

"IPCC has calculated that the temperature increase in 2030 will be 3 degrees instead of 1.5 degrees as agreed in the Paris Climate Agreement. Over 7% of the Dutch electricity mix consists of Russian natural gas. From the proceeds of this gas, Russia pays for the war in Ukraine. These current events underline the urgency of achieving savings of 10%-15% in the shortest possible time by applying power management. Now that the Sector Agreement has failed to materialize, enforcement, starting with the smaller datacentres, is the only open alternative for the OD NZKG."