Amazon shareholders have voted down a proposal for the company to limit its carbon footprint, and develop a comprehensive climate change strategy.

Calls for action were made just last month, after 7,683 Amazon employees signed an open letter to CEO Jeff Bezos and the Amazon Board of Directors that said "Amazon has the resources and scale to spark the world’s imagination and redefine what is possible and necessary to address the climate crisis."

Shareholders also voted against a proposal to limit sales of Amazon Web Service's controversial facial recognition tool, Rekognition, as well as a proposal to change how Amazon shares data on gender pay equity.

In total, 11 independent proposals were made at Amazon's annual shareholder meeting, a record for a public company this year. All 11 failed. 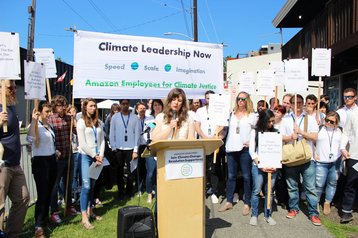 The climate change proposal, viewable here, noted that Amazon already suffers from the impact of anthropogenic climate change, citing when "an AWS data center in Sydney, Australia went down during severe weather, which broke rainfall records," in June 2016, and when "a data center supporting AWS suffered a power outage during Superstorm Riley, disrupting Amazon Alexa," in March 2018, among other incidents.

It also notes that competitors like Google, UPS, Walmart and Target are among those that have reported on climate change plans.

Around 50 members of the group Amazon Employees for Climate Justice attended the shareholder meeting event, with group spokesperson and Amazon UX designer Emily Cunningham delivering a speech at the event. She asked for Bezos to come on stage to hear the proposal, but he did not appear.

“Without bold, rapid action, we will lose our only chance to avoid catastrophic warming. There’s no issue more important to our customers, to our world, than the climate crisis, and we are falling fall short,” Cunningham said.

“We have the talent, the passion, the imagination. We have the scale, speed and resources. Jeff, all we need is your leadership.”

The group said in a statement: "Jeff remained off-stage, ignored the employees and would not speak to them. Jeff’s inaction and lack of meaningful response underscore his dismissal of the climate crisis and spoke volumes about how Amazon’s Board continues to de-prioritize addressing Amazon’s role in the climate emergency."

In a later Q&A session, Bezos answered an employee's question about whether he supports climate change initiatives, GeekWire reports. “That’s a very important issue,” he said.

“It’s hard to find an issue that is more important than climate change. … It’s also as everyone knows, a very difficult problem. Both e-commerce and cloud computing are inherently more efficient than their alternatives. So we’re doing a lot even intrinsically. But that’s not what I’m talking about in terms of the initiatives we’re taking.”

Rebecca Deutsch, with climate-advocacy group 350 Seattle, told the Seattle Times: “It’s pretty clear immediately that they’re the least transparent” of the large tech companies. “Based on what they’ve released so far, they’re the furthest behind in trying to transition off of fossil fuels.”