Spending $1.6m on electricity every year? Better cooling can cut it to $1m, Craig tells DCD

The cost of cooling high-powered data center compute has become so high that liquid cooling from companies such as Iceotope can now slash electricity bills by as much as 40 per cent in hot locations like Singapore.

And that saving isn’t just from the power required to run air-conditioning and other cooling systems, but the total electricity bill. Furthermore, water savings are even greater – as high as 95 percent. 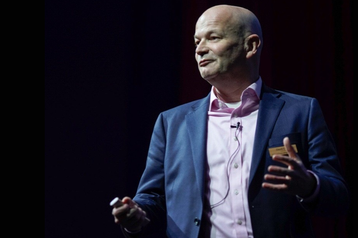 In his youth, David Craig was the bassist in a punk rock band

That’s according to an independent survey commissioned by cooling specialist Iceotope, revealed to DCD in a recent interview with CEO David Craig.

“So the total electricity load saving is 40 percent and the water saving as 95 percent. So the cost of running a megawatt of compute at the edge in Singapore is about $1.6 million a year versus a $1 million,” Craig told DCD. In terms of PUE, Craig claims that Iceotope’s technology can drive it right down to 1.03 “pretty much out of the box” regardless of where in the world the hardware is located.

And for a state like Singapore, dependent upon its neighbor for water – or for nation’s that need to use electricity to produce drinking water from desalination – the ability to dramatically cut water consumption by using liquid cooling is as valuable as the power saving.

“Equally important, liquid cooling actually causes fewer failures in electronics, because it's operating in quite a cocooned space, and keeps the hardware in a much narrower temperature band,” said Craig. As a result, it can help data center operators pack more hardware into tighter spaces, as well as improving hardware reliability, too: “We've had systems have been running seven years without a single server failure.”

One billion more people will join the world’s middle classes over the next decade, so the power of the world’s electronics must be shared with them David Craig, Iceotope

These will need to be in “a more protective environment with fewer moving parts and fewer things to worry about, which can phone home when it might need some maintenance,” so that engineers can plan their visits rather than driving from site to site, fire-fighting.

The issue of cooling is only going to intensify over the coming years with ever-greater demands placed on data centers, not just so that the masses can watch films at 4K resolutions while tweeting their friends and Instagramming their dinners, but increasingly for serious, intensive AI-based applications that require real-time or near-real-time responses, such as self-driving vehicles.

That will put compute power in some inhospitable locations, both in the Western world, as well as emerging markets, with their own unique challenges.

“One billion more people will join the world’s middle classes over the next decade, so the power of the world’s electronics must be shared with them, but we need it to be done as sustainably as possible. And most of them will likely live in environments that are quite hot and humid,” says Craig. They may also be somewhat water-constrained.

In other words, the demands on data centers in these parts of the world, whether in Asia, Africa or South and Central America, will be similar to the ones faced by operators in Singapore.

We can certainly ameliorate and mitigate the problems of unstable power David Craig, Iceotope

More than that, adds Craig, immersion cooling also makes heat re-use easier and should power go down, liquid can keep cooling CPUs for 20 or 30 minutes, he adds, without power. “If there’s a glitch you can point your UPS towards the servers, keep the servers going and the rest will be fine,” suggested Craig. “We can certainly ameliorate and mitigate the problems of unstable power.”

Craig, himself, not only has plenty of energy – as he no doubt demonstrated in his youth as the bassist in a punk-rock band – but also 30+ years of business experience, almost entirely in the tech sector. Craig’s grown-up life started at Unisys in the mid-1980s, followed by IBM during the period when its CEO Lou Gerstner was trying to teach the knackered, old elephant to dance. Less than ten years later, Craig was part of a team leading the turnaround of McLaren Software as chief operating officer.

On top of all that, he’s helped to build schools in Kenya as a trustee and founder of the charity Educate the Kids, and founded wind turbine developer Green Power Partnership – among many other things.

In other words, Craig is both involved in trying to cut data center power consumption via cutting edge cooling technologies with Iceotope, and also generating the power in the first place.