Why would you drop the 19in rack?

The 19in rack has 80 years of tradition. Some say it might be time for a change

The 19in rack mount might well be the single most ubiquitous item in the data center universe. The current EIA standard was established in 1988, but the dimensions have not changed much since the original mount was standardized in 1934.

The standard rack takes equipment with a 19in-wide front plate, and has vertically spaced mounting points located 44.5mm (roughly 1.75 inches) apart – a distance referred to as the “rack unit” or U. Racks are normally 42U tall, but the standard only defines the width and the size of the rack unit, not the depth, or external width of the enclosure, although 23.6in is typical. 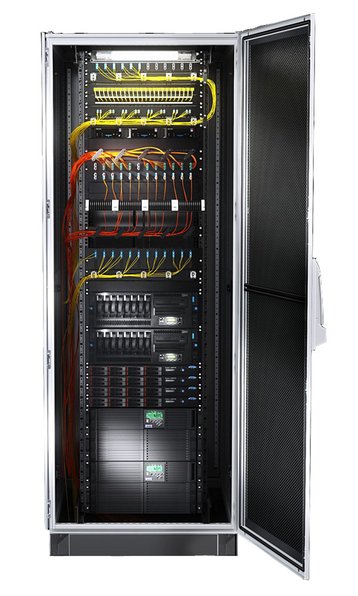 Naked racks are not often used in modern data centers, and racks and enclosures can vary in many ways, including having either two or four posts to support the installed equipment. The rack mount enclosure – the entire ensemble supplied – is a significant differentiator in equipment selection.

Properly designed enclosures do everything from improving airflow to adding security to the equipment on the rack; some even go so far as to add features such as power and cooling as components of the vendor-supplied rack mount structure. But few changes have been made to the 19in rack, which is used in many other industries, including the data center.

In the IT world, options include rack depth, with some enclosures built deeper than the normal 36in, in order to include cable management. Others have different types of mounting holes, or include sliding rails for server mounts. Some are wider than the normal 23.6in outside dimension, and can be taller or shorter to fit specific measurements in the data center.

Nothing, however, changed the 19in width and individual U height, which has made it possible for customers to choose from a plethora of vendors and fit their standard-size equipment into any rack they selected. 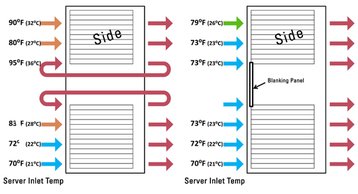 Cooling is the issue

If there is one task that has motivated major optimizations within the standard data center rack design it is the need to deliver cooling to hardware in the data center. Minor changes, such as the proper use of blocking panels in open spaces in racks, can result in noticeable changes to the cooling requirements of data centers.

Rack manufacturers have realized that by providing optimized methodologies to deliver cooling at the rack level they can help to enable data centers that are more efficient and more flexible, and which can be modified to meet changing business needs without requiring significant data center redesign.

Besides blocking panels, enclosures have been designed to optimize cooling using strictly architectural methods. In this approach, everything within the enclosure has a place where it belongs, and if cables, power cords, etc, are placed properly in the spaces provided, there is a standard, guaranteed path for air to flow through the cabinet, so cooling can be optimized and the rack will be compatible with an overall architecture such as a raised floor, hot-aisle or cold-aisle containment system.

From small enclosures to immersion tanks, the 19in rack has done yeoman duty

Some designs add rack-mounted fan units to a standard enclosure, often in the form of four to eight fans mounted in a 1U case. This simple addition gives IT the ability to deliver enhanced cooling within a rack enclosure without having to change the overall data center design. Vendors offer everything from individual fans, designed to be keep air moving near a specific heat source, to full-blown air-management systems, in which rack-mounted computer-controlled fans are tied into system management tools monitoring enclosure temperatures.

Vendors have also taken advantage of the variable external size of enclosures. Asetek has designed an entire liquid-coolant management system, sold as the RackCDU system, that is built into the sides of an otherwise standard 19in equipment rack. This cooling system manages the liquid used in a direct-to-chip cooling system, a closed-loop cooling system that delivers cool liquid directly to the hottest areas of operation in a rack-mounted server: CPUs, GPUs and memory.

Even the refrigerator-size horizontal immersion cooling bath enclosures used by Green Revolution Cooling actually contain a standard 19in rack mount, laid horizontally, so that standard servers can be mounted vertically in the immersion environment.

From small secure enclosures, the size of an office safe, to the huge immersion cooling tanks from GRC, the standard 19in rack mount has done yeoman duty for more than 80 years. Entire generations of compute, storage and networking hardware has been designed to take best advantage of this standard, and while some industries have opted for slightly larger standards for rack mounts, the 19in standard has been far and away the most successful and widely used. So why might we want to change it?

The Open Compute Project points out that the Open Rack standard is the first rack mount standard designed explicitly for data centers, and the features of the Open Rack take into account the holistic design philosophy of OCP, where all the varied components that go into a data center are designed with their interdependence in mind. How does that compare?

The standard allows for the installation of the OCP-size servers, network devices and storage, but it also differs from the previous standard in that it specifies support for a wide range of dependent devices – from dual-power buses to optical interconnects as a standard part of the reference design (currently Open Rack V2).

The goal of this standardization is to allow any equipment built to the OCP standards to be plugged directly into any vendor’s Open Rack implementation. A fully enabled Open Rack will contain power, power backup, and connectivity for the equipment plugged into the rack. This will theoretically simplify the deployment, updating and management of a data center built using the OCP model.

The difference between the basic 19in rack mount standard and the Open Rack standard is quite clear. In the former, the only commonality needs to be the ability for the equipment to be mounted in a 19in-wide rack of any number of Us in height.

To use the Open Rack model, you have to accept not just the Open Rack design but also the OCP model for data center design and implementation.