What goes around comes around

Why build a whole new server when Google’s about to chuck one away?

As much as the data center industry prides itself on the vast efficiency improvements it has made over the past few decades, and the climate-positive effects of businesses moving to modern facilities, there remains an uncomfortable truth: Electronics are dirty.

Whether it’s the chips using rare-earth metal extracted from horrific mines, or trawled from deep sea beds; whether it’s the hard drives with neodymium magnets primarily found in China; or whether it’s the copious quantities of steel used to make racks, smelted in a highly carbon intensive process, the sheer act of setting up a data center is a wildly environmentally damaging one.

And then, when the hardware is upgraded, all those servers and all those racks are simply thrown away.

The greenest server is an existing server 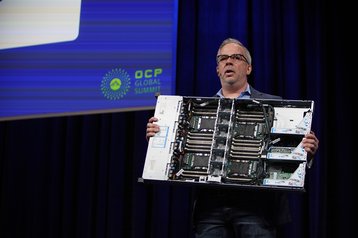 “We did a full lifecycle analysis of a standard Open Compute Project (OCP) rack to find out what portion of the total CO2 impact is attributable to pre-use phase, such as mining, manufacturing, system assembly, and so forth, which portion of the CO2 impact is tied to its use, and then which part is attributable to end of life processes,” Ali Fenn, president of ITRenew, told DCD.

“And it turns out that in a pretty common use case - where components are manufactured in Asia, systems are assembled in Eastern Europe, and then data center deployment is in the north, and end of life stuff is done locally - then it turns out that 76 percent of the net CO2 impact is attributable to that pre-use phase.”

Her company is one of several springing up to try to minimize the impact of server construction, by making data centers a more effective part of a circular economy.

The idea is simple: Hyperscale companies like Google, Facebook, and Microsoft buy staggering numbers of OCP servers with life expectancies of around nine years, but because of their need to always have the latest hardware, usually decommission the servers after just three years. Previously, this would mean that the servers were destined for an early scrapyard, but instead ITRenew buys the servers, wipes them, and resells them to less demanding organizations that then run them for another five or six years.

Of course, it still doesn’t stop the servers being environmentally damaging, and eventually they too will likely end up in a landfill somewhere, Fenn admitted. “It’s a deferral of new manufacturing as opposed to avoidance. But it buys us time, right?

“In a truly circular world, the system would be regenerative by design and those end-of-lifetime things would magically become something else with zero sort of byproduct waste. Unfortunately, electronic components are kind of the hardest things to do in that regard.”

Another challenge is that ITRenew does most of its work with more-or-less anonymous “white label” servers from manufacturers like Wiwynn or Quanta. These are based closely on open design standards from the Open Compute Project (OCP) and are often referred to as ODM (original design manufacturer) kit.

It’s harder to work with branded servers, from the likes of HPE or Dell, which are often referred to as OEM (original equipment manufacturer) kit, because OEMs use proprietary firmware, and bundle support packages and agreements which can restrict what ITRenew can do.

“We've sold a lot of OEM equipment. But you can't warranty it or support it. What's different now is that, because things are open, we can actually stand behind it and say, ‘we've tested it, we've certified it, with warranty’ - that's the key shift from proprietary OEM systems to open ODM systems.”

OCP and the ODM model has been a huge success with hyperscale companies, but it has struggled to make a dent elsewhere in the data center industry, amongst the everyday businesses where ITRenew finds its customers. “Frankly, ODM hardware has not been as widely adopted as it could be,” Fenn said. “A lot of it is that the ODMs are only set up to serve like a hundred thousand servers at a time. They're two percent margin businesses, taking orders from the hyperscalers at massive scale.”

With low margins, and often not offering warranties, the ODMs have small sales footprints and channel support, with little desire to chase comparatively tiny enterprise deals. Servers built to OCP specifications therefore represent "a fraction of the total server market and even a fraction of the ODM market," Fenn said. "But that's actually one of the things we're trying to solve."

The circular economy is increasingly becoming a focus of governments looking to minimize the impacts of the coming climate catastrophe, and to reduce their reliance on foreign-owned natural resources, with the EU in particular promising to push a radical circular agenda.

But the circular economy, like the normal economy, is currently facing the challenge of the Covid-19 pandemic. For ITRenew, the impact has been a mixed bag.

On the positive side, businesses with suddenly constrained cash flow may be more likely to turn to cheaper second hand equipment, while the pandemic has threatened to hit the supply of some components needed for new equipment.

While factories across Asia have mostly got back into business, the amount of components in the supply chain has been affected by fear. There’s been an uptick in purchases of usually slow moving memory, and very specific spares, ITRenew’s chief strategy officer, Andrew Perlmutter, told DCD.

So, it would seem that general enterprises might be more receptive to the idea of cast-offs from the hyperscale world right now. But, unfortunately, the effects of the pandemic are also reducing the supply of second-hand equipment from the giants, who are changing their habits.

Hyperscalers are facing unprecedented demand for their services, and can find themselves understaffed and cautious about unnecessary maintenance.

One response is to extend the life of their servers, reducing the number available second hand. “It’s not exactly business as usual,” Perlmutter said. “We have seen a dip, but not so substantial that it's caused major challenges.”

Once the crisis is over, however, Perlmutter expects the reverse: “I do think you'll see something of a spike in decommissioning and deployments."

Longer term, Perlmutter believes it’s unlikely that this experience will lead to hyperscalers operating servers for longer. At the moment it remains true that this year’s servers are vastly more powerful than those of three years ago, so there’s an incentive to swap them out.

However, Moore's Law is starting to sputter, and the exponential performance curve is nearing its end, so the need to refresh systems so rapidly may go away.

Organizations like ITRenew hope that the current pandemic does not blind businesses to the larger coming one - climate change - which makes it imperative to find ways to reduce the waste of resources.

“For the first time ever in history, we are all fighting a common battle and maybe people will pull together after this, and things will become less polarized globally,” Fenn said.