An improvement in modularity and security

From the scant information given, the design of Sonora Pass seems to place more emphasis on the security systems and inbuilt accessibility, with minor improvements to architecture and integration of features seen in Facebook’s current server specification, Tioga Pass.

Sonora Pass’s main design changes are the physical improvements to the box with more USB connections and an added emphasis on modularity. The server has multiple methods of installation with even more flexibility within those, such as in an open rack, side-channel, or chassis, while the biggest other change has been the implementation of “Hardware Platform Firmware Resiliency.”

This is an intrusion detection system that can run through authentication processes before the server is booted up. To technicians, most of this will be represented by a blinking LED display. If this process fails and the system sees something suspicious, then it can even reboot the server and go through an auto-recovery process. 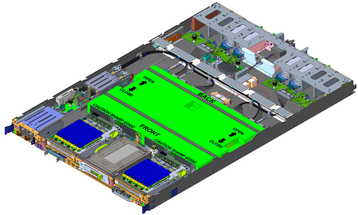 All good things must pass

The server’s microarchitecture is "based" on Intel’s Cooper Lake Processor, despite reports that Cooper Lake production was significantly scaled back by the manufacturers.

However, this was only true for general availability - Facebook was able to get a supply of the chips and sample the Cooper Lake platform for its own designs.

Facebook’s previous server was the general-purpose OCP two-socket server, Tioga Pass. This server was designed to be modular and easier to service than most servers, with accessible ports that enable customers to swap out parts more simply.

The older server used Intel’s Skylake-SP Processor with a capacity of up to 165W and used single or double-sided - depending on which version - DIMMs with 12 memory channels.

Tioga Pass also possessed a Baseboard Management Controller (BMC) chip and OCP’s Debug Card, a device with an LED screen that allowed the BMC chip to display debug messages on the device.