A brief history of cable ships

170 years of subsea cable history, dragged into place by ships 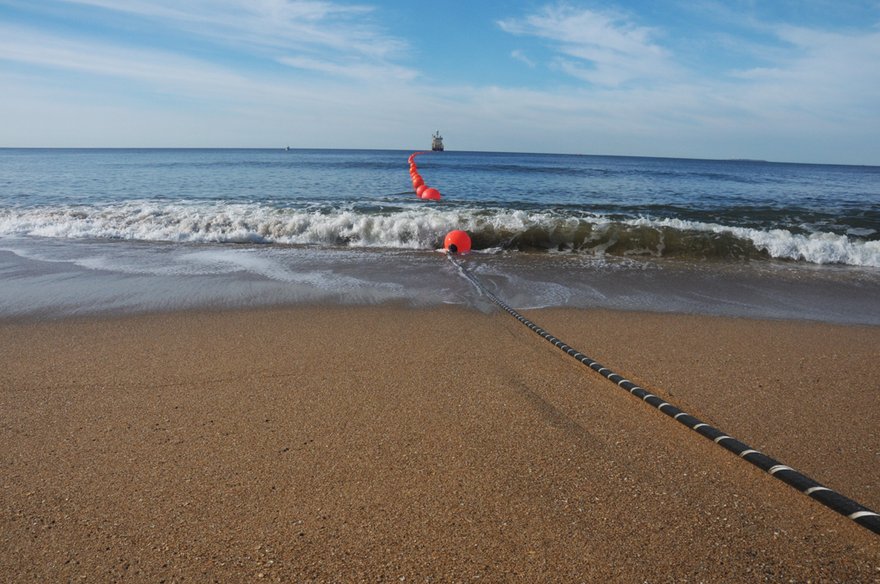 This feature appeared in the latest issue of the DCD Magazine, alongside our wider piece on the current ship shortage. Read it for free today.

One of the first offshore cable proof of concepts was conducted in 1849 by Charles Vincent Walker of the South Eastern Railway Company: Walker successfully laid two miles (3.2 km) of cable in UK waters from the ship Princess Clementine off the coast of Folkestone to the shore where it connected to the railway telegraph lines, sending telegraph messages from the ship to London.

The Clementine was reportedly a 147-ton, 180-hp iron-hulled paddle steamer launched in 1846 as a passenger ferry across the English-French Channel that was briefly used as a transport during the Crimean War in 1853.

English cable pioneer John Watkins Brett's Channel Submarine Telegraph Company was the first to lay a cable between England in France. In 1950, the converted paddle tugboat Goliath laid an unarmored cable between Dover and Cap Gris Nez in France. The cable failed the night after its first test, possibly due to damage by fishermen.

Despite its status as the first cable ship, very little is known about the Goliath; though it was likely a wood paddle tug built in 1846 measuring around 100ft and equipped with 100hp.

A year later, a stronger second cable was laid by the reconstituted Submarine Telegraph Company from a government hulk, Blazer, which was towed across the Channel. The cable was laid between South Foreland and Sangatte with the Blazer under tow from two tugs.

A month later the steam tug Red Rover was tasked with replacing a temporary part of the second cable with a new section of armored cable, but weather and navigation issues meant it missed a planned rendezvous with HMS Widgeon which had been tasked with making the splice at sea. The Widgeon did eventually make the splice at a later date.

The paddle steamer Monarch, built in the UK in 1830, was the first ship to be permanently fitted out as a cable ship and operated on a full-time basis by a cable company, and was the first of a series of cable ships named in that regal fashion.

The vessel was acquired and converted by the Electric Telegraph Company in 1853 and subsequently laid a number of telegraph cables around British and European waters. After nationalization in 1870, Monarch irreparably broke down on her first cable mission for the General Post Office and was turned into a coal hulk.

Though technically successful, the first attempt to lay a transatlantic cable between Ireland (at the time under British rule) and the US in 1857 required two vessels, was plagued with problems, and quickly failed once activated.

Two converted warships, the HMS Agamemnon and USS Niagara, borrowed from their respective governments, were loaded with cable; both ships were needed as neither could hold the required 2,500 nautical miles of cable alone.

At the first attempt, cable laying began off Ireland's Ballycarbery Castle in County Kerry, on the southwest coast of Ireland, and broke on the first day. It was grappled and repaired, but broke again over a region of the North Atlantic nearly 3,200 m (10,500 ft) deep known as Telegraph Plateau, and the operation was abandoned for the rest of the year. Around 300 miles of cable were lost, but the remaining 1,800 miles were sufficient to complete the task.

A year later, after improving the mechanisms for rolling out cable, the Agamemnon and Niagara tried again. The vessels arrived at the middle of the Atlantic, spliced cable from the two ships together and headed off; Agamemnon east towards Valentia Island, and Niagara westward towards Newfoundland. The cable broke three more times.

A third attempt was successful, though the cable was damaged within a few days after misuse by an engineer and failed within a month. 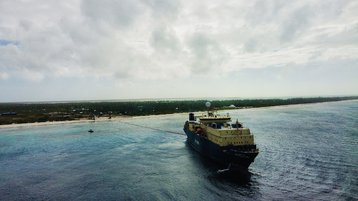 A second, more successful transatlantic cable was laid by the SS Great Eastern in 1866 and the ship, unlike its trans-Atlantic predecessors, continued to be used specifically for cable operations for years afterwards.

An iron sail-powered, paddle wheel, and screw-propelled steamship designed by English engineer Isambard Kingdom Brunel, she was the largest ship ever built at the time of her 1858 launch.

Originally a passenger ship before being contracted out for cable laying in 1865, she was converted to hold 22,450 kilometers (13,950 mi) of cable. After a successful laying project across the Atlantic, the Great Eastern continued to lay and repair subsea telegraph cables until the 1880s. Later re-fitted as a liner, then a showboat, and then used for advertising, she was scrapped in 1890.

The CS Hooper, built in 1873 in Newcastle, was the world's first purpose-built cable-laying ship. It was designed to carry the whole of the cable to be laid between England and Bermuda for the Great Western Telegraph Company, however the project was abandoned. It laid a number of cables for the company before it was sold to the India Rubber, Gutta Percha and Telegraph Works in 1881 and renamed Silvertown.

A series of dedicated cable ships, including the CS Faraday, followed shortly after the Hooper.

The CS H. C. Oersted, built for the Great Northern Telegraph Company in Denmark in 1872, was the first ship specifically designed for cable repair. She was scrapped in 1922.

One cable project was responsible for not only the first-ever loss of a cable ship, but also the second. Though details are sparse, the ill-fated CS Gomos was reportedly rammed by another ship in the 1870s while laying a cable between Brazil and Uruguay for the Brazilian Submarine Telegraph Company.

Chartered alongside CS Ambassador for the project, she was the first cable ship ever to be sunk. Replacement cable was manufactured and the CS La Plata chartered. However, La Plata foundered in the Bay of Biscay with the loss of 58 lives. The Ambassador did eventually complete the laying.

The most recent cable ship to be lost was KT Submarine’s CS Responder. Built for Maersk in 2000 and belonging to KT Submarine since around 2016, she sank in September 2020 in the East China sea off the coast of South Korea. A fire broke out on deck while laying cable, and the ship sank due to the flooding caused by the firefighting. No one was hurt and the 60 crew were evacuated to a nearby smaller cable-laying ship working in tandem with the Responder.

The first trans-Pacific telegraph cable from San Francisco in the US via Hawaii, Midway, and Guam to Manila in the Philippines, and onto China and Japan, was laid around 1901-2 by the India Rubber, Gutta Percha and Telegraph Works Company using CS Silvertown (previously the Hooper), and the Telegraph Construction and Maintenance Company (Telcon) using CS Colonia and CS Anglia, two custom-built ships.

The first submarine transatlantic telephone cable system, TAT-1, was laid between Oban, Scotland, and Clarenville, Newfoundland in the 1950s by the cable ship HMTS Monarch, a successor to the original Monarch and built in 1946.

TAT-8, the first transatlantic fiber optic cable, landing in Tuckerton, New Jersey, Widemouth Bay, England, and Penmarch, France, was laid in 1988 by CS Long Lines (owned by AT&T), CS Alert (BT), and CS Vercors (French Telecom, now Orange). Capacity on the cable was reportedly reached within eighteen months, despite some predictions it would take a decade and others suggesting it would never be filled and no other cables would ever be needed.

AT&T's Long Lines, built in 1961, was involved in a number of cable firsts. The ship also laid the first trans-Pacific telephone cable, TRANSPAC-1 (TPC-1) in 1964; and laid TPC3, the first trans-Pacific fiber cable along with CS KDD Maru. The ship was acquired along with CS Charles L. Brown by Tyco International in 1997 when it bought AT&T Submarine Systems (which was spun out in 2000 and now known as Subcom). As with all these ships, she wasn’t saved for posterity and was sold for scrap in 2003.

After a glut of new ships in the early 2000s amid the dot com boom, the years after the bust have seen very few ships built. According to the ISCPC, there are around 60 cable ships in the world today. According to SubTel Forum’s 2021/2022 Annual Industry Report, after a splurge of investment around the turn of the century, there were no new build cable ships delivered between 2004 and 2010, and only five ships were delivered between 2011 and 2020.

There have been some new ships brought into service in recent years, but usually on a one-in, one-out policy, and are often retrofits rather than new builds. 2022 saw SBSS launch a new cable ship, CS Fu Tai. Built in Spain in 2007 as an offshore construction vessel, SBSS purchased the Fu Tai in 2021 and converted her to a bespoke vessel. South Africa’s Mertech Marine recently announced the retirement of cable retrieval ship MV Lida. It plans to replace the vessel, but hasn’t made any announcements yet.

In 2020, Orange subsidiary Orange Marine said it would build a new cable ship designed to help maintain both fiber and power cables, due for launch in 2023 to replace the 40-year-old CS Raymond Croze. Its last new ship was the Pierre de Fermat in 2014.