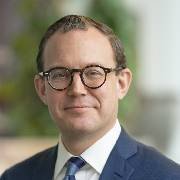 For more than 25 years Stokab has built, maintained and leased dark fibre in the Stockholm region where its network now extends to 99 percent of the households and 90 percent of the commercial properties in the region. With close to 24,000 nodes and hundreds of hubs, Stokab’s customers are already edge-ready.

The Stokab fibre network has since 1994 been financed by competitive market conditions while its owner, the City of Stockholm, has played a crucial role in the long-term commitment of the fibre network development.

With a master’s degree in liberal arts, Thord has extensive experience as a public servant. His recent role as Head of Mayor’s Office, responsible for strategic political planning within the City of Stockholm, entailed financial responsibilities as well. Thord also has experience as a communications and public affairs consultant with a focus on urban development.