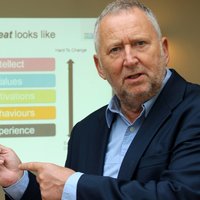 Peter was honoured with the Lifetime Achievement Award at the Datacloud EMEA Congress in 2018 in Monaco for “outstanding achievement spanning one’s entire career”. This followed his pioneering work in Nigeria in the 1970’s in implementing Nigeria’s first on-line banking system; in developing foreign exchange systems for international banks in the 1980’s; in starting one of Europe’s first datacenter construction firms in the 1990’s; in founding the company which developed the first water-cooled rack for high-density servers which was sold to APC in 2003 and which led to APC’s development of In-Row cooling and containment which dominated the datacenter market in the 2000’s; the founding of Datacenter People, the first global recruitment firm dedicated to the datacenter sector in 2010; and in 2018 the founding of Portman Partners where Peter now works, using his considerable personal network and reputation to help firms in the digital infrastructure space to find leadership talent around the world. In 2019 he was included in the Power 200 list of personalities around the world who "are leading the datacenter and cloud and sectors through charting new innovations or technological breakthroughs, investment or business acumen or exceptional entrepreneurial skillsets".