Chief Executive Officer, The Institute of Banking and Finance 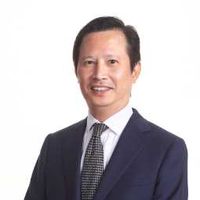 Ng Nam Sin started his career as a mechanical and electrical engineer in 1986. He joined the

office in New York, where he was the Regional Director responsible for promoting investments

into Singapore. He moved to the Monetary Authority of Singapore in 1998 where he was in charge of

developing the Singapore financial sector. In 2013, he took on new responsibilities for human

resource, information technology and corporate services. During this time, he was also the

Chairman of the Singapore Clearing House Association (SCHA) up to May 2018. SCHA

Singapore. Ng Nam Sin was seconded to the Institute of Banking and Finance in June 2018, where he is

currently the Chief Executive Officer. Ng Nam Sin graduated with a degree in engineering at the University of Glasgow, UK in 1985. He attended the Stanford Executive Program in 2008. Ng Nam Sin is married with three

children. He was awarded the Public Administration Medal (Silver) in 2008.