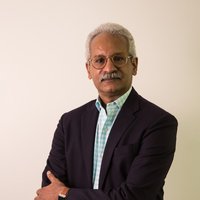 Kris Kumar is a co-founder of Bridge Data Centres with 35 years of experience in the technology, telecom, data center, real estate, and maritime industries.

Most recently Kris advised the board and management, and led a 74% divestment of, business planned and re-engineered, a large Colocation Data Centre business, with an EV of $650 million, owned by Tata Communications with multiple data centre assets in Asia including India and Singapore.

Prior to advising Tata Communications, Kris was the Regional Head of Asia Pacific for Digital Realty Trust (NYSE:DLR) between Feb 2010 and Nov 2014, and was responsible for creating the regional organization, and directing Digital Realty’s data centre portfolio expansion, as well as its corporate and operational activities in the Asia Pacific region. Successful projects were executed in Singapore, Hong Kong, Sydney, Melbourne and Osaka.

Between 2004 and 2010, Kris was the President and founder of Global DC, a specialized investment advisory and project implementation business that conceptualized, business-planned and delivered move-in ready data centre projects for major corporate enterprises and international telecom and IT companies across the Asia Pacific region.

Prior to that, Kris was Founder of CFM Group, a company engaged in business planning, project advisory/management, data centre design/build and managed IT services across the Asia Pacific region. Kris grew CFM Group to an $80 million annualized revenue business and sold it in 2000 to Nortel Networks, where he was the head of Strategy for Asia Pacific until 2004.

Kris also served as a Chief Engineer in the British and American Merchant Navy for 10 years between 1982 and 1992.

Kris received a Bachelor’s degree in Marine Engineering (Distinction) and a Postgraduate degree in Facilities Management & Finance from Sydney University. He is an Australian Citizen.