Which regions have the most energy efficient data centers?

When the PUE (power usage effectiveness) metric for data centers was first agreed upon by the members of The Green Grid back in 2007, almost everyone in that crowded room in California agreed: This is not intended to be used as a comparative metric; every situation is different.

It is with some wariness, then, that Uptime Institute publishes the chart below showing that, overall, Europe has the most energy efficient data centers, and the Middle East and Africa, the least efficient.

The chart is based on a subset of the data — those who reported PUEs between 1.0 and 2.19 (313 respondents). We considered others to be special cases or extreme outliers (see below). Regional averages ranged from a low of 1.46 (Europe) to 1.79 (Africa and the Middle East). 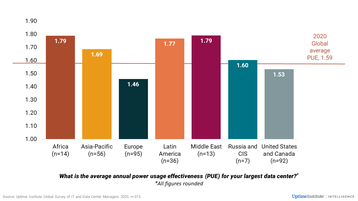 Climate is a factor

In the areas with the highest PUEs — Latin America, Africa, the Middle East and much of the Asia-Pacific region — climate may play a factor. Regions with less temperate environmental profiles may be less able to take advantage of free cooling technologies, which can substantially reduce power use. This is especially so in areas with high humidity or water constraints.

Other factors may cause operators to take an approach that is less energy efficient than they would like, but is less risky. For example, operators in regions that are prone to supply chain issues, that lack reliable access to service technicians, or that are subject to power grid instability may hesitate to use techniques or technologies that save energy but may have a more narrow margin for error. They may opt for higher levels of redundancy, which, of course, require more power.

The two regions reporting the lowest PUEs — Europe and the US/Canada — have roughly equivalent sample sizes, but Europe’s average PUE is almost five percent lower. Why? This might be because European energy prices tend to be higher, and/or that the attitudes of operators and regulators are more environmentally conscientious than those in the US. Another contributing factor: London, Amsterdam and Frankfurt house a big portion of the European continent’s data centers, along with the Nordic countries and Dublin. All have temperate climates.

What of those who said, “Our PUE is over 2.19”? Although in most cases the sample size on a per-region basis was too small to be significant, it was nevertheless noteworthy that in the Asia-Pacific region, more than one in 10 reported a PUE greater than 2.19.

When Uptime asked respondents for PUE information, there were several answer options not addressed above (e.g., don’t operate a data center, data center is filling/emptying, don’t know). Interestingly, one in six respondents (of a survey of operators/owners/managers) didn’t know the average PUE of their largest data center. European respondents were twice as likely to know as US/Canadian respondents: for many, a good PUE figure is a badge of honor. A poor one requires an explanation.