Virtualization, not cloud, has the biggest impact on data center demand

The cloud isn't leading the attack on enterprise data centers.And despite being attacked on two fronts, demand is still rising...

The public cloud is dampening demand for data center capacity and leading to closures, consolidation and a big rethink on data center ownership. Right? Not quite, according to the latest Uptime Intelligence research.

In enterprise and colocation data centers, we found that virtualization helps free up data center capacity more than any other technology or service, with public cloud and new server technologies coming some way behind. And despite this, participants in our research told us enterprise data center demand (especially for storage) is still rising. 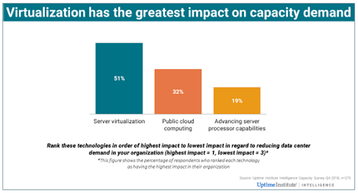 In our new report, Capacity planning in a complex, hybrid world, we asked more than 250 C-level executives and data center and IT managers at enterprises globally which technologies have the highest impact on data center demand. Virtualization was cited by 51 percent, and public cloud by only 32 percent. This was a surprise to us — we had expected cloud to have a greater impact.

The findings underline the power of virtualization, which is mostly adopted for other purposes (such as rapid provisioning) but helps push up server utilization and thus saves space, use of capital (IT) equipment, cooling and, of course, power. Some 40 percent of respondents said virtual machine (VM) compression, increasing the number of VMs per host server, is further reducing capacity demand.

A warning to operators, however: The capacity benefits of virtualization, once carried out, may be short lived. One-third of respondents said that virtualization helped initially but is no longer a factor in reducing capacity demand. Levels of virtualization are now very high in many organizations — above 90 percent is common.

Some operators are adopting a method of virtualization known as application containers (‘containers’), the most common of which is Docker. Unlike VMs, containers do not require a dedicated, pre-provisioned support environment and, therefore, will usually require less compute and memory capacity. Just 23 percent of respondents said they are using containers. About one-quarter of those using or considering containers expect it will reduce their physical server footprint further (or offset growth).

Capacity planning in a complex, hybrid world is available to members of the Uptime Institute Network here.