Creativity is there. Hope and vision are in short supply

Who would have thought the apocalypse would be so tedious? Faced with the world burning up around us, all we want for Christmas is something to watch on another channel.

We know that our digital addictions create emissions and stoke the conflagration. But this Christmas's festive blockbuster is on Netflix - and it chills.

In Don't Look Up Leo DiCaprio and Jennifer Lawrence tell the world it's doomed - and the world simply does not care. It's a sci-fi satire, and looks like a truly epic deadpan riff, which mutates the end-of-the-world trope into a deadly new variant, and captures the ho-hum-blah-blah-blah response to the COP26 climate summit. 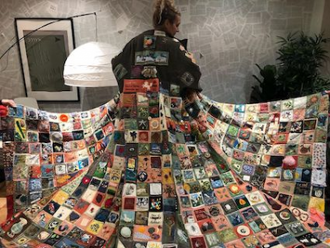 Meanwhile, another science fiction prediction has come true in twisted fashion. One day, we were told, we would have machines that are as smart as humans. I'd say we are pretty close to that now - but only because we are meeting AI halfway. They are getting smarter while we dumb down, by accepting increasingly limited virtual social spaces, which actually train us to respond less intelligently to every challenge.

What can we do?

It's tempting to sink into despair and powerless. But one thing Netflix reaffirms is the existing of human creativity - and I believe that is the basis for any hope we have left.

In October and November, a group of pilgrims walked 500 miles to Glasgow. Among their number were artists, painstakingly stitching together patches embroidered by members of the public. The result was a Coat of Hopes, whose weight and beauty embodied the fears and prayers of ordinary people about climate change, and their hopes that something will be done.

The world needs creative responses. And these can include moving artworks, galvanizing social movements, and new tech solutions. We've got to overcome the pandemic, anthropogenic climate change, and ecological collapse - all at the same time. Let's use anything that works.

Our industry is all about designing solutions, but I grieve to see people who seem to lose the ability to think. I've reported this before, but let's hear it again. I heard an executive, of a company which claims to be one of the greenest in the world, say the following: He said he was building data centers in countries where they would be powered with fossil electricity, because he had to. "We're following the market," he said. "The demand is there. So we have to build there. Otherwise, that would be bad on our shareholders."

We are not automata. We have more intelligence than our machines. We are free to not do the wrong thing.

As humans, we have the creativity to invent things that may help. We can add heat pumps, we can create quivering thermomechanical systems which are in their way as strange and beautiful as that Coat of Hopes. We can assess options like nuclear power or compressed air, to try and balance the environmental books.

As well as creativity, we have to apply simple arithmetic. It's easy enough to add things up, and see if they come to more or less than our planet can afford.