The FAA's NOTAM flight outage: complexity is the enemy

I don't get on airplanes, not for work and certainly not for pleasure. But I have plenty of sympathy for those who must fly, and who found themselves stuck on Wednesday. Like many tech problems, the FAA's outage on Wednesday was almost certainly down to over-complexity, and a system pushed to its limits.

The Notice to Air Missions (NOTAM) system failed due to a corrupted database, and this meant that flight staff could not get up-to-date safety alerts. All US domestic flights had to be grounded in case a serious issue was lurking in the alerts that staff couldn't receive. 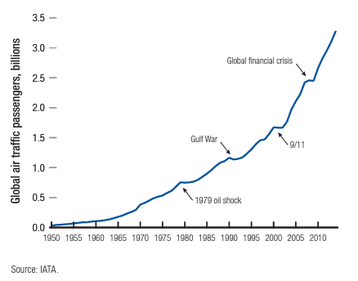 The explosion of air travel since 1950 – IATA

The event may have other results, but it's revealed that aviation can have a serious single point of failure. It is already generating calls to simplify a system that is strained by the current scale of the industry.

"How is it possible for there to be this level of disruption?", US Transportation Secretary Pete Buttigieg asked.

The answer may have something to do with the 70-year history of NOTAM, a system originally conceived for the airline industry in 1947, which was a tiny thing compared to today's mammoth air transportation system.

In 1950, US airlines carried 16 million passengers, and world traffic must have been a low multiple of this figure. After years of compound growth of between five and 10 percent per year, we now fly some 200 times as many people. The global figure reached 4.6 billion passengers by 2019, the year before Covid caused a temporary reduction in traffic.

It's worth mentioning in passing, that this growth is entirely unsustainable. Air travel provides 2.4 percent of the world's emissions. Overall its growth is out of control - and the air industry has no intention, and no conceivable way, to cut its emissions in a meaningful way (sustainable aviation fuel is a PR gimmick that can only have a tiny impact on airline emissions).

If you wanted another reason not to fly, NOTAM might give you pause - although flight safety statistics are of course, still good

At the same time, air travel is the part of your own emissions where you can exert most control. One long-haul return flight generates 2.5 tonnes of CO2 equivalent. In round figures, an average UK resident will generate a couple of tonnes heating their house, another couple driving a car, and another couple on food and drink.

Since you can't really do without food and heat, transport is where you can make the most difference. Anyone stuck in an airport on Wednesday might usefully make a resolution: from now on, refuse every flight you can.

If you wanted another reason not to fly, NOTAM might give you pause - although flight safety statistics are of course, still good.

In 1947, NOTAM was modeled on the existing maritime hazard warning system systems, Notice to Mariners, and consists of an agreed format, to flag up a vast array of possible issues, including temporary obstacles to runways, scheduled parachute jumps, and air shows, and flights being made by heads of state.

As well as stating clearly what the issue is, the notes also have to give an unambiguous location for it, and a clear timetable for when it applies. The information is in a standard order, and uses a set of abbreviations to reduce network traffic.

This results in very complex messages, which have got more difficult to understand as the number of locations and possible issues have increased.

You can read NOTAM messages for yourself, on the public NOTAM system.

If that's not clear, it's actually an example message from an online guide to reading NOTAMs. Roughly translated, it means "There is a temporary crane east of runway 24L of Los Angeles airport which is creating amended minimums."

NOTAMs are complex, and not easy to read for humans.

In 2017, an Air Canada flight nearly landed on a runway that was closed to traffic and being used for taxiing aircraft. The change of use had been flagged in a NOTAM which the pilots did not register.

In 2018, NOTAMs were described as “just a bunch of garbage that nobody pays any attention to” by Robert Sumwalt, chair of the US National Transportation Safety Board. In that year, Congress passed a bill to have NOTAM updated.

Meanwhile, airline staff organizations have criticized the system. One body, the OPS Group, runs a site called Death To NOTAMs.

It's not clear how far the FAA has gotten with improving NOTAM, but 2018 was also the year when the FAA itself was last reauthorized. The authorization period lasts for five years, so it runs out this year.

Senate Commerce Committee Chair Maria Cantwell said the committee would examine the outage as part of that process, and look into how redundancy could prevent a repeat: "The public needs a resilient air transportation system,” she told NBC.

The Allied Pilots' Association, the US pilots' union, echoed that. "This shouldn't be happening," said spokesman Dennis Tajer.

The failure of the system on Wednesday may have nothing to do with the complexity of NOTAM messages - it's not been revealed how the database file got corrupted.

However, any outage that causes this level of chaos needs to be understood fully, and any issues revealed should be added to the other problems with NOTAM.

I'll continue watching from the ground, and wish all my flying colleagues the best of luck.