When we emerge from the Covid-19 pandemic, we will still have global warming to contend with

Through 2021 and beyond, the world will begin to recover from its acute crisis — Covid-19 — and will turn its attention to other matters. Few if any of these issues will be as important as climate change, a chronic condition that will become more pressing and acute as each year passes.

In the critical digital infrastructure sector, as in all businesses, issues arising directly or indirectly from climate change will play a significant role in strategic decision-making and technical operations in the years ahead. And this is regardless of the attitude or beliefs of senior executives; stakeholders, governments, customers, lobbyists and watchdogs all want and expect to see more action. The year 2021 will be critical, with governments expected to act with greater focus and unity as the new US government rejoins the global effort.

We can group the growing impact of climate change into four areas:

In the IT sector generally — including in data centers — it has not all been bad news to date. Led by the biggest cloud and colo companies, and judged by several metrics, the data center sector has made good progress in curtailing carbon emissions and wasteful energy use. According to the Carbon Trust, a London-based body focused on reducing carbon emissions, the IT sector is on course to meet its science-based target for 2030 — a target that will help keep the world to 1.5oC (34.7oF) warming (but still enough warming to create huge global problems). Its data shows IT sector carbon emissions from 2020 to 2030 are on a trajectory to fall significantly in five key areas - data centers, user devices, mobile networks, and fixed and enterprise networks. Overall, the IT sector needs to cut carbon emissions by 50 percent from 2020 to 2030.

Data centers are just a part of this, accounting for more carbon emissions than mobile, fixed or enterprise networks, but significantly less than all the billions of user devices. Data center energy efficiency has been greatly helped by facility efficiencies, such as economizer cooling, improvements in server energy use, and greater utilization through virtualization and other IT/software improvements. Use of renewables has also helped: According to Uptime Institute data (our 2020 Climate Change Survey) over a third of operators now largely power their data centers using renewable energy sources or offset their carbon use (see figure). Increasing availability of renewable power in the grid will help to further reduce emissions. 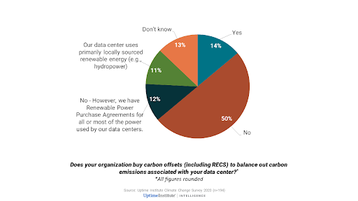 But there are some caveats to the data center sector’s fairly good performance. First, the reduction in carbon emissions achieved to date is contested by many who think the impact of overall industry growth on energy use and carbon emissions has been understated (i.e., energy use/carbon emissions are actually quite a lot higher than widely accepted models suggest — a debatable issue that Uptime Institute continues to review). Second, at an individual company or data center level, it may become harder to achieve carbon emissions reductions in the next decade than it has been in the past decade — just as the level of scrutiny and oversight, and the penalty for not doing enough, ratchets up. Why?

The biggest operators of digital infrastructure — among them Amazon, Digital Realty, Equinix, Facebook, Google and Microsoft — have made ambitious and specific commitments to achieve carbon neutrality in line with science-based targets within the next two decades. That means, first, they are setting standards that will be difficult for many others to match, giving them a competitive advantage; and second, these companies will put pressure on their supply chains — including data center partners — to minimize emissions.