Generator rating is not all it's cracked up to be

Genset OEMs play fast and loose with generator ratings, and you could end up the worse for it

I’m going to upset a few folks so I may as well go for a whole bunch all at once. My aim (or is it simply ‘target’) is to vent a growing personal frustration with what should be a simple task – deciding the rating of a data centre standby generator. 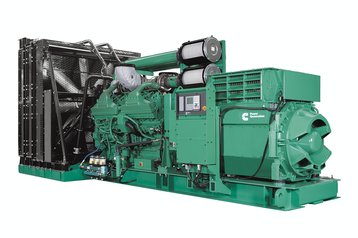 How much is that genset in the window? – Cummins

By ‘rating’ I don’t only mean ‘power’, that is a straightforward summation of the worst case (all the possible loads including battery charging on the hottest day of the year etc) or a deliberate design decision to cater for partial load, but also for how many hours per year (all the way up to 100 percent of them) I want the machine(s) to be able to deliver that power. For those of you who are already bored, or just wondering where I am meandering to, I have set out the three central themes to which I have attached a bullseye:

As an adjunct to these I am going to call into question the changes over time of the design requirements of the Uptime Institute and how they appear to look the other way’when genset builders bend the truth.

The ISO standard is a short and concise piece of work and Part 1 describes four ratings that allow the same engine to be loaded higher if the running hours per year are not continuous:

ISO 8528-1 allows for ±3 percent tolerance and let’s not forget that the rated capacity may be de-rated for altitude or ambient temperature for the site location but, needless to say, the rated power goes down as you move from COP to ESP, although not as far as you might think and sometimes by only a 10-15 percent reduction. For example, and for reasons I can’t explain, there are some PRP gensets where 70 percent load is apparently lower than the COP rating of the same engine – and there is the first point to reinforce; we are talking about one engine with four maximum power ratings depending on the annual duty hours but without any ‘adjustment’ needed etc.

So, to choose a genset rating, you should look at two areas.

Firstly, the availability of the utility supply, to gauge how many hours the gensets are going to be asked to run. There are plenty of places in the world where a few hours every day are the ‘norm’ and more (actually a lot more when you consider the sort of locations where the majority of data centres are built) where a utility failure lasting more than 10 seconds is a very rare event over 10 years. Those ‘reliable’ locations only place 12 hours per hour demand on the gensets, assuming the user does monthly testing.

Secondly, consider the time to replace a utility distribution transformer or repair a feed cable, assuming that you only have one radial feed onto site from one sub-station instead of the much preferred dual radial feed from two sub-stations. Note that I don’t mean or imply ‘two utilities’, which is almost non-existent and not needed even if it were. In places like the UK a new 2MVA transformer can be delivered and installed in less than one week (120 hours) and a cable repair in much less. So what would be the point in COP? LTP would be adequate, especially as redundancy and partial load will very often turn that machine into COP anyway! I think that my point is that you should choose the rating to match the application and the location.

The first problem that is seen (often) is that people use the term ‘Prime’ as if it is the best rating and largely ignore that the fact that its average load is limited to 70 percent. This is exacerbated by genset providers who don’t list the COP rating and often don’t detail the 70 percent limit but use the term ‘variable load for unlimited hours’. However, historically, data centre loads generally don’t vary over time and, luckily for most, also never approach full load. When you factor in redundancy and partial load into the ‘likely’ load calculation you nearly always find that the 70 percent average is never actually breached.

Have you ever looked at your Prime Rated 2MVA genset and thought of it as only being able to deliver 1,120kW in continuous use? If you have, then you are in a minority. If you haven’t you probably are not running much of a risk as long as your data centre load is lower than 80 percent and you have N+1 in gensets or you have 2N even at 100 percent load. Of course this does depend upon your redundant modules/systems actually working (e.g. not failing to start) when the utility fails.

To summarise, the situation is made worse by genset OEMs only mentioning two (of the four) ratings for their products – Prime & Standby. Not COP, PRP, LTP or ESP, just Prime & Standby – and with scant reference to 70 percent load for the Prime but, to be fair to some, sometimes ‘variable load’ without stating the average over 24h.

So, it should be easy? Then you get offered some form of ‘Data Centre Genset’ that is described as offering full load for unlimited hours. I’m not going to beat about the bush – this is a cheat. The genset supplier is relying (with a high degree of safety margin) on the data centre load not being 100 percent and the chances of utility failure lasting more than a few moments rare in mature data centre markets.

But where has this ‘cheating’ come from? I think that it stems from the requirements of the Uptime Institute for Tier III & IV genset rating. It used to be simple when UTI called for generators that were rated for the load with unlimited hours – that meant gensets that were COP or 70 percent of a PRP rating. But this leads to oversized gensets for the majority of users with associated capital costs and maintenance problems. So, in a general relaxation of their guidelines (see the note at the end) they now require a ‘letter’ from the genset OEM (not the dealer or sales organisation) that says that the chosen genset can do rated load for unlimited hours.

The other point worth making is that Uptime doesn’t permit taking into account the reliability of the utility, partial load or redundant. So what, I hear you ask? Sounds good, but they don’t ask the engine manufacturer and there are plenty of examples where the ‘letter’ is issued clearly flying in the face of the fact that the engine is Prime rated but the kW load is stated at 100 percent, not 70 percent.

It’s a cheat, a technical deception, a calculated risk of smoke and mirrors. In reality it is not generally a problem because partial load comes to the rescue which leads to smaller gensets with higher loading – which is a good thing. What is not a ‘good thing’ is that it is all done without the customer being aware of a risk, no matter how small it probably is.

Who will get burnt?

The last point to make here only occurred to me when having dinner recently with one of my heroes – the just-retired chief engineer of a major consulting firm. In fact, it didn’t ‘occur’ to me – it was explained to me. The point he made was based on what would happen if the utility failed, the gensets had to run for three weeks and one went bang.

Who would be held to account? The OEM? The dealer? The contractor? No, the engineer with insurance who should have known that the ‘letter’ was a sham. A bit like Samuel Goldwyn of MGM who said ‘A verbal contract is worth about as much as the paper it’s written on’

If you want to spend more time considering all of the details surrounding this topic, then please come and join one of the DCPro Power Professional training courses where generator application and selection has a dedicated session. We look at the technical data sheets of engines and gensets and can see the problems, including the choice of ‘Performance Class’ (for the fidelity of the generated voltage and its frequency) – an equally mysterious subject that should be a discussion point with the genset provider but rarely is.

Note! Relaxation of Uptime requirements:
Consider that the original white paper (that contained the one-line diagrams) called for Tier IV to have 2(N+1) or 2S, i.e. dual-bus, each containing a redundant system. That later relaxed to 2N, i.e. dual-bus, one redundant for the other, each containing a system without internal redundancy. Then the big change to ‘N after any failure in pathway or system component’ – which means that an N+1 system with the right power (or cooling) distribution system can reach both concurrent maintainability and fault tolerance. The jump from 2(N+1) to N+1 cannot be regarded as anything but a substantial relaxation – albeit not necessarily a bad thing as 2(N+1) was hugely wasteful of capital, space and energy.