Just 5% of managers in our 2019 survey said women represented 50% or more of staff, while one-quarter had no women at all among their build, design or operations teams

With decades of strong growth behind it and no slowdown in sight, the data center sector is struggling with staff shortages. According to Uptime Institute’s 2019 global survey of more than 1,000 IT and data center managers, and what we hear anecdotally, the situation seems to be worsening:

The view from the sector’s supply side is more optimistic. We surveyed more than 500 data center designers, consultants and vendors globally, and just 28 percent believe a shortage of facilities staff will limit growth in the coming five years.

The big question is: Will technology such as artificial intelligence and robots help alleviate staffing issues? As the figure below illustrates, our supply-side research suggests it will fall short of providing a solution, at least in the short term. While most believe AI will be widely used in data centers within five years to improve operational efficiency and availability, the degree to which it could help fulfill staffing requirements will be limited. Just 26 percent believe that AI will lead to reduced employment relative to workloads within five years. And while AI will almost certainly play a key role in future data center robotics, few (12 percent) believe that robots will replace significant human employment in data centers during this timeframe. 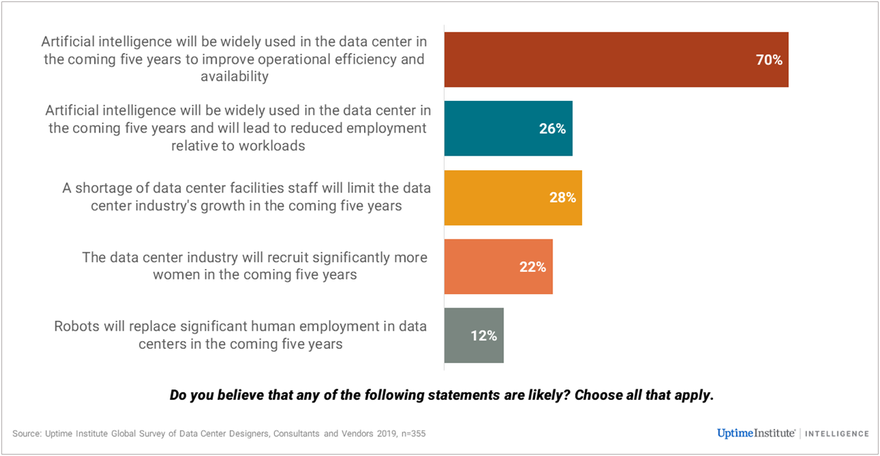 One of the most widely discussed approaches to meeting the sector’s talent pipeline is to address its gender imbalance. Just five percent of operators and managers in our 2019 end-user survey said women represented 50 percent or more of staff, while one-quarter had no women at all among their build, design or operations teams. Although there are efforts across the sector to attract and retain a wider pool of talent, including women, there is no data to suggest early success.

There could be several explanations for this apparent change in sentiment: While addressing the gender imbalance is being widely discussed, relatively few have changed their hiring processes. Conversely, organizations that have implemented new hiring approaches may be struggling for early wins.

Each of the questions in the figure above was asked separately; they were not grouped under the guise of potential staffing problems or solutions. Yet taken together they may be reasonably interpreted as a snapshot view - from the supply-side - of the sector’s near-term future state of employment: staffing shortages will largely be met, but AI/robotic technologies and concerted efforts to attract more women will play limited roles.