Data center operators give themselves a “Fail” for sustainability 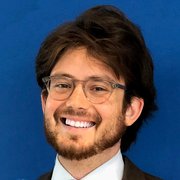 Lenny Simon is a senior research associate at Uptime Institute

The global data center industry describes its own sustainability performance as average, compared with other industries — and most think efforts are not substantially reducing environmental impacts. 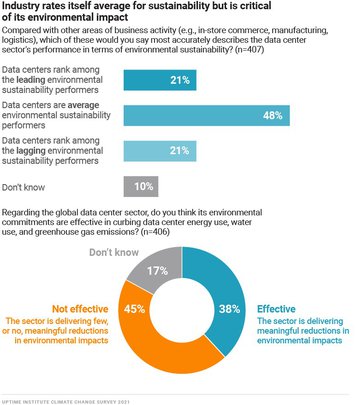 A recent Uptime Institute global survey of over 400 data center owners and operators asked whether the industry’s environmental commitments are effective in curbing data center energy use, water use and greenhouse gas emissions. Only 38 percent say yes, while just under half (45 percent) of respondents say the industry's commitments deliver few or no meaningful reductions in environmental impacts (Figure 1).

Data center operators in Europe are the least likely to take a positive view of progress. Only about a third (35 percent) say meaningful reductions in data center environmental impacts are occurring. This critical stance by Europeans is reflected elsewhere in Uptime Institute’s research and may be attributed to a greater concern for sustainability within the European Union compared with North America. In a previous survey, Europe-based respondents were the most likely to say that government regulations should play a greater role (i.e., more regulation is needed) in improving the overall sustainability of the data center sector. (See Bring on regulations for data center sustainability, say Europe and APAC.)

But awareness of sustainability issues, and the limits of their own efforts, is growing among data center owners and operators globally. Most survey respondents in the US and Canada are also critical of industry commitments to reduce environmental impacts, although less so than their counterparts in Europe. Excluding the don’t know responses, 55 percent of North American respondents say commitments do not deliver meaningful reductions, with slightly less than half (45 percent) taking an optimistic view.

Our 2021 climate change survey also explored how the data center industry views its own efforts in terms of sustainability when compared with other areas of business activity (for example, in-store commerce, manufacturing, logistics). Most respondents (48 percent globally) say the industry is average for sustainability performance. This view is consistent across Europe (48 percent), the US and Canada (45 percent), and the Asia Pacific region (not including China; 43 percent).

This view may surprise some, given the heavily publicized environmental programs of some hyperscale operators (Amazon, Google and Microsoft, for example). Data also shows the industry buys more renewable energy (relative to consumption) than other sectors. However, given the lack of a universal measurement for sustainability across different industrial sectors, it isn’t easy to accurately assess sustainability performance.

Overall, the survey data suggests that Europeans believe the industry should do more to reduce environmental impacts. The opposite seems true in the Asia Pacific region, where data center owners and operators mostly view the industry’s commitments as effective in reducing environmental impacts. Views in North America are mixed and probably changing — possibly reflecting the relatively early stages of regulatory scrutiny of the industry’s sustainability performance to date.