In a bid to reach this target, Volkswagen AG has expanded its computing capacities at Norwegian operator of CO₂-neutral data centers, Green Mountain. 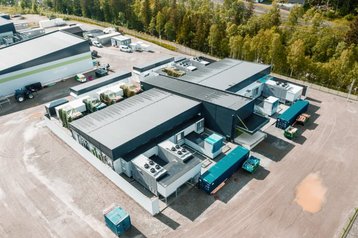 In a statement, Volkswagen says that one-quarter of its global data center operations will run carbon-neutrally, which the company claims will equate to annual CO₂ savings of 10,000 tons.

European Data Centers have agreed to go net carbon-neutral by 2030, so if Volkswagen succeeds in doing this by 2027, it's well ahead of the target.

The partnership with Green Mountain will provide Volkswagen with a solid chance of hitting this target, with all servers at Green Mountain running on 100 percent renewable electricity generated by hydropower, while they are naturally cooled by the adjacent fjord.

"Green IT is a key topic on our ESG agenda. While technology is the key driver for more efficiency, an improved customer experience, and new business models, IT accounts for about three percent of global CO₂ emissions," said Hauke Stars, member of the board of management, IT, and digitalization at Volkswagen Group.

“Given the rising demand for computing power and data storage to enable Volkswagen Group’s NEW AUTO strategy, a sustainable IT roadmap with ambitious goals is paramount to systematically reduce our carbon footprint. With data centers being the biggest contributor of carbon emissions in IT, expanding our computing capacity at Green Mountain is a strong lever to make our data center operations carbon-neutral by 2027.”

Volkswagen has been working with Green Mountain since 2019, when the company opened its data center operations at Green Mountain's RJU1-Rjukan site in Telemark, Norway.

Volkswagen Group has six data center operations worldwide in total with three in Wolfsburg, two in Norway, and one in Singapore.