The test system will use two of Dresden-based Cloud&Heat's liquid-cooled 20-foot containers equipped with 1,600 high-performance graphics cards from manufacturers such as Nvidia. It will be based south of Stockholm, operated by Vattenfall, and will offer cloud services, while also supplying heat to the local district heating system. It is due to open in the third quarter of 2020. 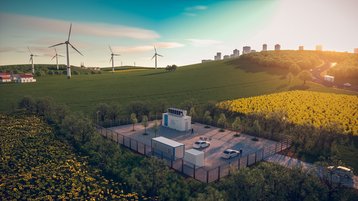 "In the utility industry, using waste from data centers has been around for 10 or 15 years, but waste heat from air cooled systems is really low grade. This heat comes out in water at 60 degrees - for a utility wanting to utilize heat, this is a game changer," Birger Ober, head of strategy and business intelligence of Vattenfall, told DCD.

Utilities are looking to decarbonize the heating sector, said Ober, which creates an opportunity for this approach - and the two companies hope that the data center services involved will prove attractive to customers.

The data center will be colocated with a Vattenfall-owned combined heat and power (CHP) plant, adding in a concept which Ober describes as "combined heat and compute" (CHC). Thanks to the CHP plant, the site already has an input into an existing district heat system. It also has access to fiber, enabling the creation of the cloud service platform.

Although cloud services are a new departure for utilities, partner Cloud&Heat rates their chances of success as pretty high: "We think the utilities will in future be the new cloud providers," Nicolas Röhr, CEO of Cloud&Heat, told DCD. "They will be the biggest and smartest competitors to Google, Amazon and Microsoft. They have everything, they have power and heat reuse, they often have fiber networks, they have facilities and they have customers."

For its part, Vattenfall is well practised in using waste heat, and Ober prefers to call a byproduct rather than waste: "It's just like egg shells. If you want to eat an egg, you have an egg shell, and it's a byproduct you can use."

Ober is also CEO of the Sustainable Digital Alliance (SDIA), an industrial collaboration that launched in 2019, which aims to enable green infrastructure that can meet the demands of the digital economy. As well as Cloud&Heat and Vattenfall, SDIA includes others in the utility and digital world including liquid cooling vendor Asperitas.