Russian troop phone calls in Ukraine were intercepted after they used commercial phone lines to communicate.

The military was forced to use the unencrypted lines of communication after their own attacks on 3G towers broke the Russian government-built 'Era cryptophone' that was meant to be used to communicate. 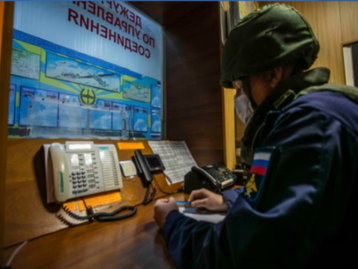 – Ministry of Defence of the Russian Federation

In an intercepted phone call, independently confirmed by fact-checking group Bellingcat, two apparent Russian FSB officers discuss the death of the general outside of Kharkiv.

“In the call, you hear the Ukraine-based FSB officer ask his boss if he can talk via the secure Era system. The boss says Era is not working,” Bellingcat executive director Christo Grozev said on Twitter.

“Era is a super expensive cryptophone system that [Russia’s defense ministry] introduced in 2021 with great fanfare. It guaranteed [to] work ‘in all conditions’.”

However, "the idiots tried to use the Era cryptophones in Kharkiv, after destroying many 3G cell towers and also replacing others with stingrays," Grozev continued. "Era needs 3G/4G to communicate.

Stingrays are eavesdropping devices that mimic cell towers, meaning that mobiles connect to them, allowing for data to be intercepted.

Russian troops have also used unencrypted walkie-talkie radios, allowing others to listen in.

Russia has targeted some Internet infrastructure, as well as accidentally damaged it with its indiscriminate shelling of civilians, but has not sought to fully disconnect the country. This could be because Russia's military is also making use of the infrastructure.

The UK Ministry of Defense has noted Russian forces are attempting to disrupt Ukraine's access to communications and information, as demonstrated by airstrikes on two TV towers in the country since the invasion began.

"Russia is probably targeting Ukraine’s communications infrastructure in order to reduce Ukrainian citizens’ access to reliable news and information," the MoD noted on Twitter. "Ukrainian Internet access is also highly likely being disrupted as a result of collateral damage from Russian strikes on infrastructure. Over the past week, internet outages have been reported in Mariupol, Sumy, Kyiv, and Kharkiv."