Russian forces took out the Internet in occupied Kherson, Ukraine, over the weekend. 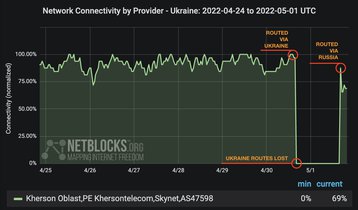 The initial disruption in Kherson and a part of Zaporizhzhia is believed to have been caused by targeted attacks on physical infrastructure, including a fiber optic backbones and a simultaneous power outage impacting service operators’ equipment.

Internet traffic is now being routed through Crimea - Ukrainian territory that was seized by Russia in 2014. As we reported at the outset of the war, Russia took over the Internet in Crimea and other contested territories, seizing the assets of incumbent telcos and routing traffic through Rostelecom.

Doing this allows for both state surveillance of Internet traffic and means that the Internet is heavily censored.

Russian state-owned media falsely claimed that it was actually Ukraine that shut down the Internet. Ukraine's State Service of Special Communication and Information said that the disconnection was "intended to make at least an appearance of a new quasi-state for Russian domestic consumption."

The services added: "Against this background, they are planning to feed the fake results of a possible fake referendum to the Russian populace."

After failing to capture Kyiv and ensure a rapid victory, US intelligence agencies claim that Russia will likely stage fraudulent referendums in mid-May in which citizens of Donetsk, Luhansk, or Kherson vote to become a part of Russia.

The Russian government has officially begun to shift Kherson to the rouble, but locals are believed to be trying to exchange them for the Ukrainian hryvnia.

Kherson was the first major Ukrainian city to be captured by Russian forces, having been seized on May 2. Around 40 percent of the population are believed to have been able to flee, but escape routes have been cut off - with the only road available going through Crimea.