President Trump has signed an executive order aimed at giving the federal government power to block US companies from purchasing any foreign-made telecommunications equipment deemed a national security risk.

On the same day, the US Commerce Department said it would add Huawei, and 70 affiliates, to its 'Entity List' - banning the telecom giant from buying parts and components from US companies without government approval.

A bad day to be Huawei 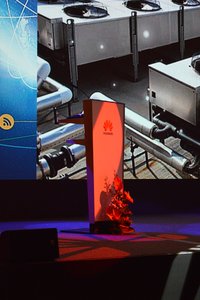 "The unrestricted acquisition or use in the United States of information and communications technology or services designed, developed, manufactured, or supplied by persons owned by, controlled by, or subject to the jurisdiction or direction of foreign adversaries augments the ability of foreign adversaries to create and exploit vulnerabilities in information and communications technology or services, with potentially catastrophic effects, and thereby constitutes an unusual and extraordinary threat to the national security, foreign policy, and economy of the United States," the order signed by Trump states.

The order gives the Secretary of Commerce power to determine which transactions may be potential risks, but does not name a specific company.

However, the order comes after months of the US labeling Huawei as a national security threat, and pressuring allies not to use its equipment, amid a wider growing US-China trade war.

The US has long banned Huawei from many of its critical infrastructure projects in the country, and the telecoms giant's US revenues remain relatively small.

David Wang, executive director of Huawei's board, said before the executive order: "Our business in the US is not very big. We are a company with global operations, so if there is this or that change in any country, the impact on our global business is very little."

After the order, the company said in a statement: "We are the unparalleled leader in 5G development. We are ready and willing to engage with the US government and come up with effective measures to ensure product security. Restricting Huawei from doing business in the US will not make the US more secure or stronger; instead, this will only serve to limit the US to inferior yet more expensive alternatives, leaving the US lagging behind in 5G deployment, and eventually harming the interests of US companies and consumers. In addition, unreasonable restrictions will infringe upon Huawei's rights and raise other serious legal issues.”

'Huawei Facts,' the company's initiative to provide "the official truth and facts about Huawei" was quick to promote the claim that "banning Chinese technology would cost the 15 affected members of the US Rural Wireless Association at least US$800 million to strip their networks of Huawei and ZTE equipment."

But Trump's order has received support from others, especially those in his own party. Republican Senator Ben Sasse, a member of the Senate Select Committee on Intelligence, said: “Let’s cut to the chase: China’s main export is espionage, and the distinction between the Chinese Communist Party and Chinese ‘private-sector’ businesses like Huawei is imaginary.

"The Trump Administration is right to recognize this reality and issue this order. Huawei’s supply chain depends on contracts with American companies and the Commerce Department ought to take a careful look at how we can effectively disrupt our adversary.”

The Commerce Department's blacklist may indeed prove more disruptive for Huawei - although it is unclear how much of an impact stopping the company acquiring parts and components from American companies without US approval will have.

US officials told Reuters that it would make it difficult, if not impossible, for the company to sell some products because of its reliance on US suppliers.

"This will prevent American technology from being used by foreign-owned entities in ways that potentially undermine US national security or foreign policy interests," Commerce Secretary Wilbur Ross said.

Instead of security concerns, the Commerce Department gave another reason for the ban - it focused on Justice Department allegations that the company had conspired to provide prohibited financial services to Iran. Meng Wanzhou, Huawei's CFO and daughter of company founder Ren Zhengfei, is currently facing charges for her alleged involvement in this scheme.

In a statement about the Entity List, Huawei said: "Huawei is against the decision made by the Bureau of Industry and Security (BIS) of the US Department of Commerce. This decision is in no one’s interest. It will do significant economic harm to the American companies with which Huawei does business, affect tens of thousands of American jobs, and disrupt the current collaboration and mutual trust that exist on the global supply chain.

"Huawei will seek remedies immediately and find a resolution to this matter. We will also proactively endeavor to mitigate the impacts of this incident."

The US briefly levied a similar ban against Chinese state-owned ZTE after it pled guilty to selling US technology to Iran and North Korea, forcing the company to suspend trading as an estimated 15-25 percent of components in its equipment is believed to originate from US companies. The ban was quickly suspended, ahead of a later plea deal.

The Huawei ban is not yet effective, so it remains unknown how the company will be affected.

The company previously said it spends around $11 billion annually, a third of its budget, on the acquisition of US components, and lists 33 US companies among its top 92 suppliers.

“Huawei being unable to manufacture network servers, for example, because they can’t get key US components would mean they also stop buying parts from other countries altogether,” an executive at a Huawei chip supplier told Reuters.

“They can relatively better manage component sourcing for mobile phones because they have their own component businesses for smartphones. But server and network, it’s a different story."

Doh Hyun-woo, an analyst at NH Investment & Securities in Seoul, added: “The bigger concern would be US allies that used to buy Huawei’s components may not continue businesses with Huawei, because of fear of possibly upsetting the United States."

With the US' openly hostile stance towards Huawei, much of its future success will depend on how other nations approach the company.

Its business within China is, of course, secure (albeit, with the caveat that it may now struggle to create US-free products), and it maintains a strong foothold in developing nations - often with the financial and diplomatic backing of the Chinese state.

But how US allies, particularly those in lucrative European markets, will respond to Huawei remains a matter of debate.

“Our perspective is not to block Huawei or any company,” French President Emmanuel Macron told Bloomberg at the Paris Viva Technology 2019 fair this week. “France and Europe are pragmatic and realistic. We do believe in cooperation and multilateralism. At the same time, we are extremely careful about access to good technology and to preserve our national security and all the safety rules.

In comments earlier this year, German Chancellor Angela Merkel appeared to suggest a similar approach: “There are two things I don’t believe in: First, to discuss these very sensitive security questions publicly, and second, to exclude a company simply because it’s from a certain country.’’

But her comments came after a representative of the country’s intelligence service, BND, told a committee of lawmakers that Huawei was not a trustworthy company, as part of a wider intelligence community-led effort to stop Huawei being involved with Germany's 5G rollout.

A similar conflict has gripped the UK, with vying factions fighting over whether Huawei should be allowed to further build out the nation's infrastructure.

The country previously operated under what it pitched as the perfect compromise - it would allow Huawei to be involved in critical infrastructure, despite US concerns dating back to at least 2012, but the company would partner with the state to police its products.

In Banbury, Oxfordshire an office block known as ’The Cell’ checks Huawei gear and code for security holes - accidental, or otherwise. It is staffed by Huawei employees, but with some oversight by the UK spy agency, the Government Communications Headquarters (GCHQ).

Various early reports criticized the Huawei-led bonus structure, and a culture that apparently amounted to the company policing itself, but over several years The Cell was tightened to offer more oversight. Its annual reports have highlighted security flaws (that appear to be accidental) in Huawei products.

But with the coming shift to 5G, and amid US pressure, many within the UK's government and surrounding security apparatus have raised alarm bells over turning to Huawei.

Last month, The Daily Telegraph reported that at a National Security Council meeting Prime Minister Theresa May said she would allow the company limited access to build parts of the 5G network such as antennas and other “noncore” infrastructure.

The meeting's leak sparked an internal investigation, and the sacking of Defence Secretary Gavin Williamson, who was blamed for telling a reporter about the meeting. Williamson denies the allegation, and "swore on his children's lives" that it was neither him nor his staff.

But the sacking did not stop the mounting controversy surrounding Huawei's British ties.

This week, neoconservative British foreign policy think tank the Henry Jackson Society released a report titled Defending our Data: Huawei, 5G and the Five Eyes. Co-written by Conservative Member of Parliament Bob Seely, and with a foreword by the former Chief of MI6, Sir Richard Dearlove, the report paints a damning picture.

The report questions Huawei's ownership structure and motives, and claims that in practice, it will not be relegated to non-core infrastructure if the 5G rollout goes ahead.

In response to the report, a Huawei spokesperson told DCD: “This report is long on politically motivated insinuation but short on fact. It fundamentally misunderstands the nature of modern China, global technology markets and of 5G. The isolationist approach they recommend may support an America first trade agenda but it’s hard to see how it’s in UK’s national interest.

"We are an independent, employee-owned company which does not take instructions from the Chinese government. In 32 years, there have been no significant cyber security issues with our equipment. We hope and expect that any decision on Huawei’s participation in Britain’s build-out of 5G networks will be based on solid evidence, rather than on unfounded speculation and groundless accusations.”

On a visit to London, company chairman Liang Hua said: “We are willing to sign a no-spy agreement with the UK government. No spying, no back doors.” This week, the senior news editor for British news organization Sky, Paul Harrison, said Huawei had appointed him to a senior communications role at the company, as it tries to quash the spy allegations. It also employs the UK government's former CIO, John Suffolk.

Elsewhere in Europe, De Volkskrant reported today that the Dutch intelligence service is investigating whether Huawei is involved in espionage for the Chinese state in the Netherlands.

Huawei denies its involvement in state spying, and earlier this year fired an employee based in Poland who was arrested over accusations of spying.

"So the question I want to ask is for a company with a $100 billion in revenue, with businesses in 170 countries, with the fact that we’ve provided leading products to most telecom operators around the world, we serve hundreds of Fortune 500 companies, we also serve hundreds of millions of consumers around the world – you say Huawei is a cybersecurity risk without any proof. On what grounds?"