But the technopolis is already behind schedule

The Konza Technology City development will be funded with Chinese concessional loans - state-backed funding that offers better rates than market loans. Separately, the Chinese government will also fund the Sh50 billion ($500m) JKIA-James Gichuru expressway, to be built by the China Road and Bridge Corporation.

A lot of debt 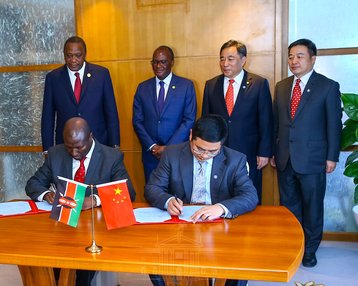 The project, which was conceived by both the ICT ministry and Huawei, includes a National Cloud Data Centre, Smart ICT Network, Public Safe City and Smart Traffic Solution, and a Government Cloud and Enterprise Service.

It is part of the wider Konza Technology City (also known as Konza Technopolis) project, started in 2008 as a Kenya Vision 2030 initiative. The city remains significantly delayed - it was meant to open in 2020, but a December 2018 Reuters report noted that the city currently consists of a single unfinished eight-story building.

President Uhuru Kenyatta, who is in China for the second Belt and Road Forum, said: "Since inception, the Belt and Road Initiative has forged cooperation in the development of critical sectors including expansion of infrastructure, education and capacity building, trade facilitation and investment, agricultural modernization, industrial promotion and energy connectivity."

At the same forum, Huawei also signed an MoU with Pakistan to build a data center backed by concessional loans, after previously building Chinese state-funded smart city and surveillance projects in the country.

Concessional loans tied to the purchase of Huawei equipment have proved a highly successful way to win contracts in developing countries.

In a 2016 Policy Research Working Paper, the World Bank detailed some of Huawei's history in Kenya: "In 2004, the Chinese Development Bank loaned the major telecommunications firm Huawei $10 billion for overseas expansion, and Nigeria took $200 million in loans to buy Huawei equipment.

"In 2012, Huawei was awarded a tender to build a national fiber-optic network in Kenya worth $60.1 million, a deal financed [by] the China EXIM Bank. The China EXIM Bank also gives cheap capital to state-owned firms to bid for large infrastructure projects.

"Their state-owned status allows them to report profits at longer intervals, instead of quarterly as most firms are required. Other foreign firms with shorter time horizons and a higher profit requirement face a unique challenge when competing for contracts in Sub-Saharan Africa."

China is not the only nation to use concessional loans: For example, the Italian government funded the building of Konza City's roads, water and sewerage infrastructure by Italian firm ICM-Impresa Constsruzioni Maltauro Group in a Sh40 billion ($400m) loan. But China remains the most aggressive deployer of such loans.

While the practice allows for poorer nations to invest in infrastructure projects that have the potential to bring real economic change, concessional loans - and the wider Belt and Road Initiative - are wrapped up in controversy. Critics say that the projects are often designed to benefit China's more than the host state, and can leave already indebted countries further in debt.

Excluding these new loans for Konza and the expressway, Kenya’s external debt is seven times its annual budget - with China accounting for almost 60 percent of those loans.