The Zambia National Data Centre, funded by the Chinese government

Zambia will soon open its national data center as part of a significant modernization initiative spearheaded by Huawei.

Minister of Transport and Communications Brian Mushimba said that the Zambia National Data Centre campus will open sometime next month, while the official site has a countdown timer for 56 days, pointing at the date at the end of March. 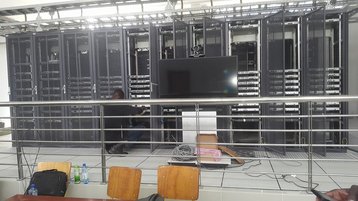 “This is part of the Smart Zambia phase one project as we move to electronic-government system, which will see Government provide all services online,” Mushimba said, Lusaka Times reports.

Zambia Information and Communications Technology Authority (ZICTA) director general Margaret Mudenda added: “The national data center is one way of preparing for the future, this is one of the latest modes of storing data.”

Local publications have pegged the data center as a $440 million project, but this appears to be based on misinformation or miscommunication.

The data center is a $75 million facility, and it is likely that the remaining $365m will be spent on a computer assembly plant at the same site in Lusaka, as well as on the rest of the first phase of Smart Zambia 2030 initiative.

ZNDC general manager Garry Mukelebai said the data center will be built to Tier III standards, which he added allows for only 94 minutes of downtime in a year.

Sub-station tender documents on the ZICTA website reveal that there will be two other modular data centers, a back-up facility and a disaster recovery site located in Roma and Kitwe respectively.

The facilities are being built by Huawei Technologies Zambia, which will also develop Zambia’s national broadband system. Huawei has operated in the country for 13 years, introducing 3G technology to Zambia in 2009 and helping build the country’s mobile communications infrastructure.

In 2012 Huawei and ZTE took a delegation of senior Zambian government officials and engineers to China, and last year Huawei held a road show around the nation under the theme ‘Smart Zambia, Smart Nation,’ led by country director Emilion Ming.

Funding for both Smart Zambia phase one and phase two is being provided by Chinese state-owned banks on a concessional loan.

These ‘soft’ loans are provided by China at substantially better terms than that of a standard loan, and have been used to secure Chinese infrastructure projects across the globe, including in Cuba, Nepal and Cameroon.

In the 2016 book The Rise and Fall of Emerging Powers: Globalisation, US Power and the Global North-South Divide, author Ray Kiely notes that, of the $35 billion China is thought to have loaned to Africa between 2000 and 2014, Zambia received $2bn.

China has also partnered with Zambia and the UN on a renewable energy scheme in the African nation, with the 2014-2018 project hoping to tap Zambia’s solar, hyro, wind and biomass resources.