Human living quarters will be built first, but computing infrastructure is also planned

Thales Alenia Space will conduct a feasibility study of 16 design concepts to support a human presence on the Moon.

Funded by the Italian space agency (ASI) as part of a collaboration with NASA over its Artemis Moon program, the effort will consider life support, transportation, and infrastructure such as a Lunar Data Center.

Data centers on the Moon 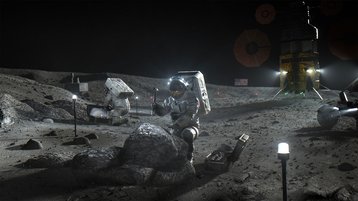 The studies will primarily focus on the 'Shelter,' a pressurized lunar surface module that will first be used by astronauts in emergencies, and will grow to become a staging point for exploration.

Then Thales Alenia Space, a joint company owned by Thales and Leonardo, will look at a lunar telecommunications system that will communicate between the lunar base, the planned Lunar Gateway space station, and Earth.

Next comes studies into areas like lunar laboratories, observation domes, and transportation systems.

"Infrastructures needed for the future lunar base include a Lunar Data Center and a power generation and distribution facility," the company said.

It is important to note that the feasibility study is in an early phase, and may not result in a concrete data center plan. Artemis is also transitioning from Trump administration plans to Biden ones, and may still change.

As it stands, Artemis plans to put men and women on the Moon in 2024, followed by permanent human habitation on our nearest body by the end of the decade.

But before then, we'll get 4G on the Moon. Nokia plans to deploy a small 4G base station by 2022, as part of the Tipping Point program, with 5G hopefully coming later.

The effort is loosely connected to a wider effort, LunaNet, which aims to build an Internet for the Moon - which itself is planned to grow to a Solar System Internetwork.

The framework hopes to define the protocols and standards for off-world connections, as well as build out both the networking and compute capabilities of space.

“Somebody could land something on the far side of the Moon, that takes raw data from all the different things around it,” LunaNet lead David Israel explained to DCD, in the project's first media profile.

“All the sensors themselves don't have to be that smart, you could just have an Edge computing device on the Moon. Cloud computing and storage, and all this stuff that we see here which was enabled by networking protocols and then network access between Edges and devices, then becomes possible in our lunar scenarios.”