North Two “one of the greenest data centers in the world”

London Internet Exchange (LINX) is a partner for the new Telehouse North Two data center, and a number of other new and existing customers have registered their interest in purchasing space within the premises. The £135 million ($177 million) Telehouse North Two investment adds to existing connectivity at the Docklands campus. 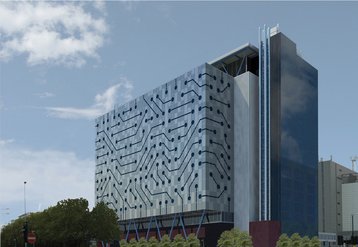 The 11-story North Two facility, in London’s Docklands, is built on a Telehouse campus first opened in 1990

The siting of LINX within the new data center will meet increased demand for low-latency data flow, or for high volume traffic exchange with 100 Gbps Ethernet routers.

LINX is currently one of the largest neutral Internet exchange points (IXPs) in Europe. It was founded in 1994 by a group of ISPs and educational networks, and is a founder member of the Europe-wide alliance of Internet Exchanges, Euro-IX.

The not-for-profit organization operates IXPs in London, Manchester, Edinburgh and Cardiff in the UK, and in North Virginia in the USA.

LINX traffic has been travelling through the carrier-neutral Telehouse campus since it was opened in 1990. Telehouse hosts the ‘vast majority’ of LINX’s internet peering traffic

John Souter, chief executive of LINX, said: “Our relationship with Telehouse goes back more than 20 years and it has enabled us to transform London’s Docklands into one of the world’s leading global internet hubs. This partnership is only going to grow in importance, with the new facility delivering greater connectivity and capacity as internet traffic continues to grow.”

Hiroyuki Soshi, managing director of Telehouse Europe, said: “The partnership between Telehouse and LINX has driven innovation and progress in the UK and worldwide, leading to unrivalled connectivity. The launch of North Two will further drive the industry to reach new heights and allow businesses to grow exponentially.”

North Two is the only UK data center that owns an on-campus 132 kV grid substation connected directly to the National Grid, which reduces transmission losses and improves power density and service continuity, according to Telehouse. The site has a total power capacity of up to 73 MVA.