Planning documents confirm Amazon Web Services is behind the proposal

Swindon Borough Council has approved an application to build a data center on a site previously occupied by Hewlett-Packard (HP) - and confirmed in published documents that the data center is for Amazon Web Services (AWS).

According to the application, lodged in April 2021, a new 27MW four-hall facility will be built on the former Burderop Hospital site in Brimble Hill, which was used by HP for two data centers from the 1990s until 2020. DCD deduced the likely applicant was AWS at the time, and this has now been revealed in documents associated with the approval. 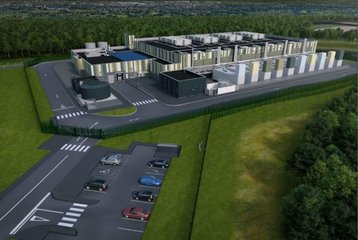 The planning agreement is between Swindon and Amazon Data Services, an Amazon subsidiary based in the web giant's London office at 60 Holborn Viaduct, and signed by Iain Gavin, director of AWS region services for Europe.

The council's statement says it considered the application under the National Planning Policy Framework (NPPF), specifically considering that the data center will be set in an area of natural beauty (AONB) next to a site of special scientific interest (SSSI), and in the setting of the listed building, Burderop House.

All these considerations were answered by the fact that the development is "in the public interest," and replaces an existing structure: "The evidence demonstrates that the new building would be well screened from public vantage points and as the use would not change, and the floor space would be similar, the level of activity would not be significantly different. The design details and the landscaping proposals, including the protection of the surrounding tree belts, ensure that there would not be significant harm to the AONB."

As to Burderop House, the new building would "reduce the openness of the historic setting of the listed properties," but the harm would be "less than substantial," and outweighed by the benefits, the Council says.

The 12.3m high single-story data center will have a direct connection to the National Grid, with medium-voltage (MV) transformers, along with 11 diesel back-up generators, and a tank of 40,000 liters of diesel fuel.

According to the agreement Amazon will pay 120,000 for ecological mitigation and 15,000 for highway works, installing a vehicle-activated roadsign.

The planning permission lasts for three years, during which time Amazon must start building. Among its conditions, the building must comply with the BREEAM "excellent" level specification, and demonstrate good drainage, lighting, and parking (including space for ten bicycles) before occupation. Once the data center is in operation, it must submit to noise control measurements within three months, to ensure it does not cause a nuisance.