The one time you hope for a windy day

A renewable energy project in Sweden that will help power a Google data center is closer to completion, now that contractors and management have been secured.

Called the Stavro project, the planned 62 turbines will power Google’s Hamina data center via a power purchase agreement. Located in northern Sweden, the wind farm will be divided into two sub-sites, Blodrotberget (40 turbines) and Blackfjället (22 turbines) for a total capacity of 254MW.

Originally owned by Holmen AB, a paper company and one of Sweden’s largest forest owners, the land was meant to be developed into a wind farm by Holmen’s subsidiary Stavro Vind.

Both companies were owned by the Swedish investment firm, Lundberg, until Stavro was acquired - along with the land the wind farm was meant to be on - by a consortium made up of Siemens Financial Services (a sister company of SGRE), German pension fund Nordrheinische Ärzteversorgung, and Korean Midland Power for $298m.

The wind farm is expected to be finished before the end of 2021, and commercially operational that same year. 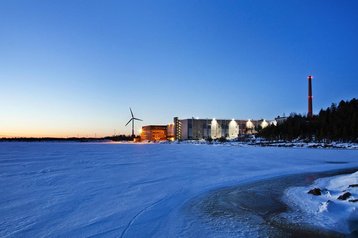 Back in September, Google announced 18 new renewable energy agreements, totaling 1,600MW. The deal is the largest in corporate history, bringing Google's overall portfolio of wind and solar agreements to 5,500MW.

In Europe alone, it will acquire 793MW of renewable energy capacity in Finland (255MW), Sweden (286MW), Belgium (92MW) and Denmark (160MW). Google signed a PPA with the new owners of Stavro earlier this year.

Google worked with Swedish wind farms in the past to power its data center. In 2014, it signed a deal with Nordic wind farm operator Eolus Vind AB to use power generated by its 29 wind turbines in Southern Sweden in an attempt to offset energy costs.

Hamina is located on the coast, some 145 kilometers east of the Finnish capital Helsinki and has a population of slightly over 20,000 people.

The existing Hamina facility was opened in 2011 and has been upgraded several times, most recently in 2018, when Google opened a cloud region in Finland.

Alfonso Faubel of SGRE’s onshore business unit said: "The project will facilitate Holmen’s transition to 100 percent renewables consumed in its business and meet part of the fast-growing demand for electricity of Google’s European data centers."

Prime Capital's CEO Andreas Kalusche added: “Our close collaboration with SGRE has enabled us to source the project early and to add value through a full-scope commercialization process.

“This strategy, in a market benefitting from one of the world’s best wind resources and the ability to realize large-scale projects, increases overall profitability and risk-adjusted returns for our investors.”