As we reported previously, this is STT GDC’s first foray into the Thai data center market and the facility be located in the district of Ramkhamhaeng in Bangkok. The data center will have a gross floor area of 60,000 sq m (645,900 sq ft) and is touted as the largest hyperscale facility in the country when completed. 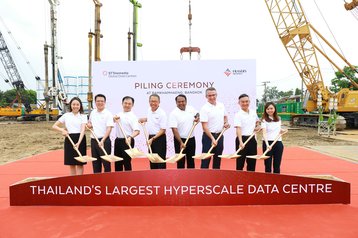 In response to a query from DCD, STT GDC revealed that its hyperscale facility will consist of two purpose built seven-story buildings within a data center campus. Each building will support an IT load of 20MW, with construction taking place over two phases. The first phase involving the initial building is expected to be completed and ready for service by 2021.

Aside from targeting leading energy efficiency and PUE, STT GDC says the data center will be built to standards such as Uptime Tier III, LEED Gold and TIA 942 Rated-3: Concurrently Maintainable Site Infrastructure.

But why build such a large facility? A STT GDC spokesperson cited the “massive” potential and demand for data center services as the country digitalizes as part of the Thai government’s Thailand 4.0 and National Digital Economy Masterplan.

TCC Group also manages T.C.C. Technology, which operates three data centers in Thailand and is one of the largest commercial data center operator in the country. The new facility will be built under a joint venture between FPT and STT GDC with ownership split 51-49 in FPT’s favor.