Bitcoin keeps the Scrubgrass plant open, enables site clean up at the cost of more emissions

The Scrubgrass plant and pollution is owned by Stronghold Digital Mining, which describes itself as an "ESG-friendly" (environmental, social and governance friendly) crypto-mining firm - arguing that burning the waste coal enables it to clean up contaminated sites. Investors in the firm include MG Capital, and Stronghold CEO and chairman Greg Beard. Stronghold has said that the electricity generated at Scrubgrass would be uneconomical without the on-site crypto-mining data center it plans to build. 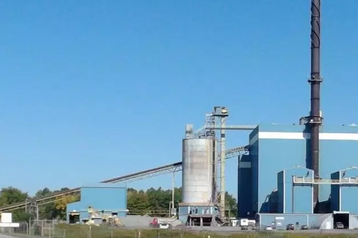 Bitcoin enables a rather dirty clean up

Coal has been mined in Pennsylvania since the 19th century, and there is more than 450 million tons of waste coal in heaps around the west of the state. These piles create acid runoff which contaminates ground and surface water - and they are also prone to catching fire.

Scrubgrass opened in 1993, burning the coal waste to make electricity. In the 1990s, efficient fluidized bed combustion began to make energy from waste materials and other "difficult" fuels economic, and there are now 12 such "co-generation" plants in Pennsylvania.

They burn coal waste (called "gob" or "bony") which is dug from huge surface heaps. However, their emissions are much worse than conventional coal plants and the rise of renewables has undermined their economic advantage. The Environmental Protection Agency (EPA) is on the case of cogeneration plants, and in 2020 allowed them a limited reprieve to continue operating. Most only work seasonally when the price of electricity is high, according to E&E News.

Stronghold says it can keep Scrubgrass running continually, by handing the power cheaply to its on-site bitcoin mining facility: “Our ownership of the Scrubgrass Plant combined with the environmental benefits which accrue to the region allow us to mine bitcoin at what we believe to be some of the lowest costs in the industry while making a transformational contribution to the environment,” said Beard in a statement.

"Without bitcoin, we would be unable to do the work that we’re doing,” Stronghold co-chairman Bill Spence said in an interview with the Pittsburgh Business Times.

According to Quartz, EPA figures show that the plant produced 241 GWh of energy in 2019, while producing more than 400,000 tonnes of CO2. That works out at 1.67 tonnes of greenhouse gas per MWh of energy, while the US average for regular coal is 1.1 tonnes of GHG per MWh. Global Energy Monitor says a Clean Air Task Force report found that particulates from Scrubgrass kill around seven people per year - and they also produce high levels of mercury and acid gases such as hydrogen fluoride.

A Stronghold spokesperson sent a fuller defense of the process: "No one is dismissing the fact there are emissions from this process. However, in an ideal world there aren't billions of tonnes of GOB/waste coal dumped in the state of PA. The state and its people have been left with a major burden."

Rather than comparing the emissions from waste coal plants to conventional plants, the real comparison is with the polluting piles of waste which can catch fire, said our contact: "The uncontrolled burning piles are worse, not just on regular emissions, but also in toxicity as they are obviously burning in an uncontrolled environment, unlike the plant."

In the plant, some 90 percent of NOx emissions 99.9 percent of particulates and 98 percent of SO2 are removed, the company claimed: "If the piles are left there, all of this is ending up in the local atmosphere." The fly ash left after the burning process is classified as a fertilizer and can be returned to the land.

Removal of water pollution and recovery of land is also important: "AMD (from run off of waste coal) is the biggest water polluter in the state of PA. Currently, the only real effective way to remediate this land and stop the pollution of water and the killing of ecosystems is by its removal. This costs a lot of money, money which without the private enterprises in operation, would cost the state of PA billions and billions of dollars more."

The Stronghold spokesperson added: "There are major environmental benefits to the work we are doing. Not least the remediation of the land. We have already returned over 1,000 acres to local communities. This land has been turned into sports fields and amenities. The previously polluted water now has live ecosystems. The geography of the area is important. A lot of the leakage ends up in the Allegheny River, which you may or may not be aware is the main headstream of both the Ohio and Mississippi Rivers."

Tougher emissions rules in the Obama era would have closed down coal waste burning plants like Scrubgrass, but Quartz reports the plants dodged those rules by a questionable move - classifying themselves as mining operations to gain four years' exemption. Under the Trump administration, EPA rules were loosened again and the plants could continue.

Stronghold responds that, locally, the plants have bi-partisan support, and the plant is designated as a "Tier II renewable energy plant," similar to a hydroelectric station: "In fact, just last night, the Pennsylvania Environmental Quality Board (EQB) made changes to the Regional Greenhouse Gas Initiative (RGGI) to make sure waste coal plants can operate in the state under emissions rules."

The project is also listed on the site of Olympus Power, which bought 30 percent of the project in 2014. The Olympus site has an argument for the environmental benefits of Scrubgrass burning the bituminous coal refuse (GOB) left over from decades of coal mining in the region, while also cleaning and landscaping former refuse sites: "Scrubgrass provides a unique and profound environmental benefit by consuming coal from mining activities as well as abandoned coal refuse piles. As a consequence, mining sites can be reclaimed and restored to usable land."

With Bitcoin mining keeping the flames burning, Stronghold plans to continue to expand, and could take on 200MW of power capacity.

As well as Scrubgrass, Stronghold is in the process of acquiring two further plants in Pennsylvania "to ensure the vital work they do is kept up," a spokesperson told DCD.

"We are an environmental clean up firm that is now using bitcoin to maintain economic viability. We didn’t start with bitcoin. We want to continue cleaning up the state of PA, and without bitcoin, that would be economically challenging. We are using the economic incentive of bitcoin to continue the clean up operation and remediation of PA. Something environmental agencies, politicians, and most importantly, local people want and need us to do. And something we are going to continue to do. "